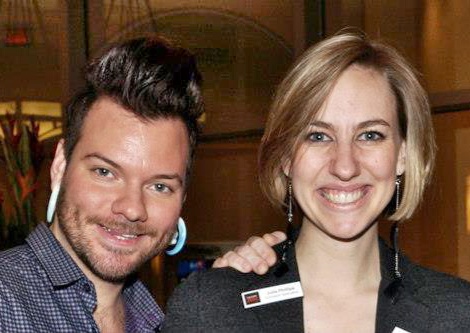 Geoffrey Szuszkiewicz and Julie Phillips are in the third month of their pledge to "buy nothing" for one year. (BuyNothingYear.com)
Canada

In today’s materialistic world, deciding to buy nothing for an entire year might seem unfathomable. But two Calgary roommates are doing just that, and have discovered that their efforts to change their consumer habits have come with surprising benefits.

Julie Phillips and Geoffrey Szuszkiewicz started their “Buy Nothing Year” at the beginning of August and will weed out their consumption in three phases. Their first and current phase entails not purchasing any household items or consumer goods.

Phase two eliminates paying for services of any kind such as haircuts, transportation, and dining out. The final phase, which will start in the last month of the experiment, will eliminate all spending—including on food. Only paying for rent, utilities, cellphones and some personal cleaning products will be allowed.

“When we change these behaviours and stop spending and shopping it creates space in our lives to welcome in new things,” says Szuszkiewicz, 30, who works in operational accounting for an oil and gas company.

“We’ve gained more time to focus on those things, on what really matters, as opposed to possessions or stuff.”

The idea for the experiment sprouted after Phillips lost her apartment due to the Calgary floods in June. Szuszkiewicz offered her a room at his place but it meant Phillips would have to get rid of 80 percent of her belongings. Downsizing forced her to look at the true value of “stuff.”

“I just wanted a feeling of lightness and space in my life, and there’s a really interesting correlation between the things I physically hold onto and the things I emotionally and mentally let take up space,” says Phillips, who works in alumni relations at the University of Calgary.

Halfway through the third month of their experiment—which the roommates are documenting on a blog—Phillips says the process has been liberating and has given her a deeper sense of her own resourcefulness.

The two have taken to bartering items or using their skills as currency—skills that include everything from dance lessons and pet sitting, to cooking meals and offering website design services.

Friends have also offered their support in various ways. “It’s given people permission to give us stuff that they have lying around that they’re not using,” says Szuszkiewicz.

“It’s amazing how your community can support you,” adds Phillips.

The roommates hope to raise awareness about the environmental impact of overconsumption, and get people thinking about what they really need. The response has been mainly positive, and friends, family, and even strangers have been inspired to try modified versions of the project, says Szuszkiewicz.

“Lots of people have told us that they’re not going to buy as much, or that they think a little bit more about what they’re purchasing or where their money’s going,” he said.

Movements such as “International Downshifting Week,” “Buy Nothing New,” and “Buy Nothing Day” (aka “Occupy Xmas”) are becoming increasingly popular as people opt out of unbridled materialism and take stock of the mental and physical toll of “keeping up with the Joneses.”

According to slowmovement.com, Americans—and it would be similar for other Western countries—have approximately five hours more free time per week than they had 30 years ago, but people are busier than ever before. Many are now seeking to live simpler lives and in the process are reconsidering their relationship with consumerism.

Phillips and Szuszkiewicz admit their endeavour isn’t easy, but say the benefits that they are experiencing—not only financial and environmental but also physical, emotional, and spiritual—make it worth it.

Phillips says the experiment has forced her to adopt a slower pace of life, while Szuszkiewicz is surprised how quickly he lost the desire to shop, and is drawing great pleasure from the extra time he spends outdoors after ditching his car.

Both say they will likely continue many of the new habits after their experiment comes to an end.

“The people that we’re going to be at the end of the year are going to be drastically different just due to the fact that we’re changing so many behaviours, and rewiring the way that we do things in our day to day lives,” said Szuszkiewicz.