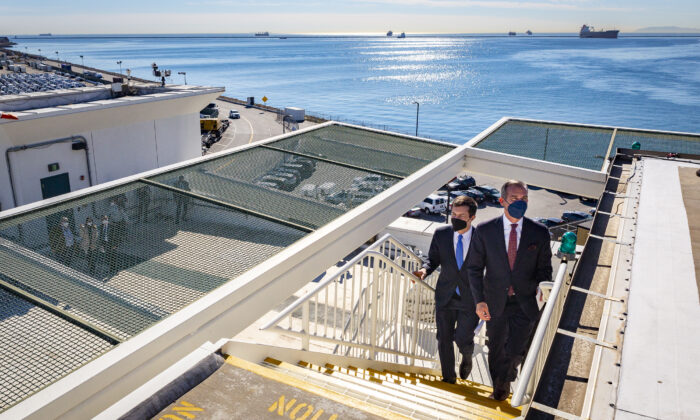 In his first visit since the start of the supply chain crisis, the U.S. Transportation Secretary Pete Buttigieg toured Los Angeles-area ports on Jan. 11, commending port workers and officials for “saving Christmas.”

“One of the reasons why Christmas was not, in fact, canceled was because ports like LA and Long Beach moved record levels of goods, allowing an all-time record high of retail sales this holiday season,” Buttigieg said at a press conference.

Los Angeles Mayor Eric Garcetti joined the secretary at a press conference on a helipad at the Port of Long Beach. He thanked President Joe Biden and his administration.

“I want to thank the Biden administration, Joe Biden, this Cabinet, and this Congress for proving, together with the American worker, that not only Christmas could be saved but that American competitiveness, know-how, and the desire to rebuild this country is alive and well,” Garcetti said.

Biden tapped Garcetti to serve as the ambassador to India when his term as mayor is up in December.

The twin ports continued to see a backlog of cargo ships this month. On Jan. 10, 194 ships of all kinds were at dock or waiting in the waters off San Pedro Bay. Some ships were spread out across the Pacific Ocean, waiting for their turn to dock. Of those, 102 were container ships. One container ship, Pinocchio, from Liberia, has waited nearly two months to dock, according to the Marine Exchange of Southern California.

Buttigieg started the morning in San Pedro at the USS Iowa, a retired battleship, to have coffee with labor leaders to discuss upcoming projects at the ports.

By 9:45 a.m., he boarded an 83-foot catamaran called Triumphant, joined by nearly a dozen local lawmakers and port officials, including Reps. Ted Lieu (D-Los Angeles), Nanette Barragan (D-San Pedro), Alan Lowenthal (D-Long Beach), along with Los Angeles County Supervisors Hilda Solis and Janice Hahn, all of whom represent areas of Los Angeles and Long Beach near the ports, according to FOX 11 News.

Along the way, Buttigieg stood at the bow of the ship, asking about the towers of cargo stacked on docked ships from Panama, Columbia, Hong Kong, and other distant countries, according to FOX 11.

Hahn and Solis spoke to the secretary about efforts to reduce emissions along the corridor that trucks and trains use to transport cargo from the ports to giant inland warehouses.

The catamaran cruised under the new Gerald Desmond Bridge, a $1.4 billion landmark project that opened in 2020, FOX 11 reported.

By 11 a.m., the tour reached the dock in Long Beach where the secretary was met by Garcetti, who accompanied Buttigieg to a press conference to discuss the progress made on easing supply chain problems.

“When there is an issue affecting ports here, you will feel it as far away as my Indiana hometown,” Buttigieg said.

“Not only is this about presents under the tree, but this is about essential goods, like medical goods, that are needed this moment of continued public health challenge,” Buttigieg said.

He highlighted recent grants received by the ports and mentioned that $17 billion more was committed to the ports from Biden’s Infrastructure Law, signed into law in November.

In December, the Port of Long Beach received a $52 million grant from the U.S. Department of Transportation’s Maritime Administration to fund the development of an on-dock rail support facility. The facility will allow smaller train segments to connect to a larger train.

Construction on the project is expected to start in 2023 and will allow the port to move more cargo by train, according to port officials.

“The governor’s budget allocates $2.3 billion for ports to address bottlenecks in our supply chain, advance our efforts to decarbonize the freight system, and ensure a robust and resilient workforce continues to move goods on behalf of the state and nation,” Seroka said.

The funds are expected to pay for port-related projects that increase the capacity to move goods more quickly on rails and roadways, a rail yard expansion project, new bridges, and zero-emission projects. Some of the money is also slated for workforce training, enhancing the state’s ability to issue commercial driver’s licenses and new data systems, according to port officials.

FOX 11 contributed to this report as the pool reporter for the tour.