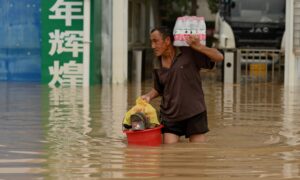 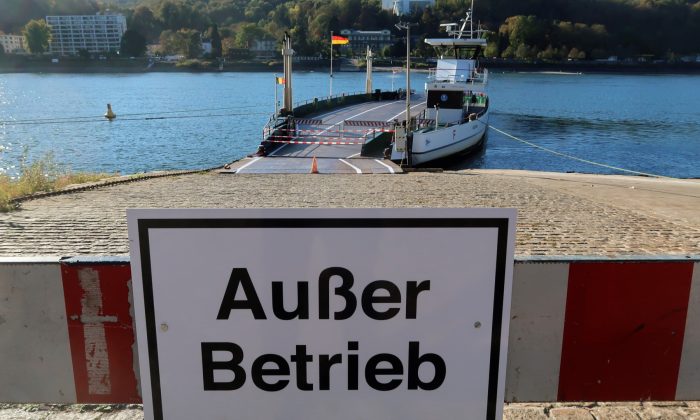 A sign to the Rhine car ferry of Bad Honnef-Rolandseck reads "out of order", in Bad Honnef, south of Bonn, Germany, on Oct. 21, 2018. (Wolfgang Rattay/Reuters)
Asia & Pacific

SINGAPORE—Low water levels on the Rhine river have caused a fuel supply deficit in parts of Europe’s industrial heartlands that is sucking up cargoes from more than 10,000 kilometers away in Singapore.

That has created a shortage of heating oil heading into the European winter, pushing up the market and triggering a search for supplies from as far away as Southeast Asia, where there is ample fuel and gasoil prices are low.

Northwest European prices for gasoil hit a record $35-per-ton premium over Singapore values for November fuel deliveries, and December premiums are still above $20 a ton. That means gasoil could be pulled into Europe from Southeast Asia via arbitrage trades through the end of the year.

“The wide arb means it’s possible to shift gasoil to the West [Europe] at a profit,” said Sukrit Vijayakar, director of Indian energy consultancy Trifecta, adding that the situation stemmed from the low Rhine water levels and Asian refineries coming out of turnarounds.

The arbitrage to Europe from Asia is usually workable when the price spread is at least $15-$18 a ton. Many Asian refineries have just come out of maintenance, or turnarounds, increasing the region’s availability of fuels like gasoil.

Gasoil inventories held in the Amsterdam-Rotterdam-Antwerp [ARA] refining and storage hub fell for the fourth straight week to 2.4 million tons, the lowest volume since mid-July this year, according to data from Dutch consultancy PJK International.

By refilling ARA stocks with gasoil, including from Asia, traders said they hope to be able to ship gasoil up the river as soon as water levels recover.

Some meteorologists expect low water levels to last until January, however, which may mean a continuation of the blockage and ongoing market distortions.

As a result, European traders may start exporting gasoil out of the region to offset arbitrage volumes into ARA from Asia.

“It is one thing to ship the distillates from Singapore to Europe. But it will not reach the end-customer as long as ship traffic is constrained due to low water levels of the Rhine and other rivers,” said Carsten Fritsch, a commodity analyst at Germany’s Commerzbank.

“German retail gasoline and heating oil prices are very high as a result … No visible improvement is in sight here in the near future, according to German weather forecasts,” he said.

Europe typically starts to stockpile gasoil, which is used for heating in the region, ahead of the cold winter months.

Asian refiners, though, must act fast to serve the European demand window, as American and also Russian suppliers are also eying the opportunity.

“Comparing Asian refiners with their U.S. counterparts, the latter stand a better chance to go to Europe as freight rates are cheaper and the voyage time is very much shorter,” one trader in Singapore said, declining to be named as she was not allowed to talk in public about commercial operations.

Despite America’s advantage over Asia to supply Europe, ship-tracking data in Refinitiv Eikon shows one tanker, the Diva, carrying gasoil from Southeast Asia to Europe.

The 37,000-ton tanker is currently in the Mediterranean and expected to arrive at Antwerp on Nov. 16.

“If this arb window stays open, I’d expect more such routes to be fixed next week,” said a Singapore-based tanker charterer, also declining to be named.