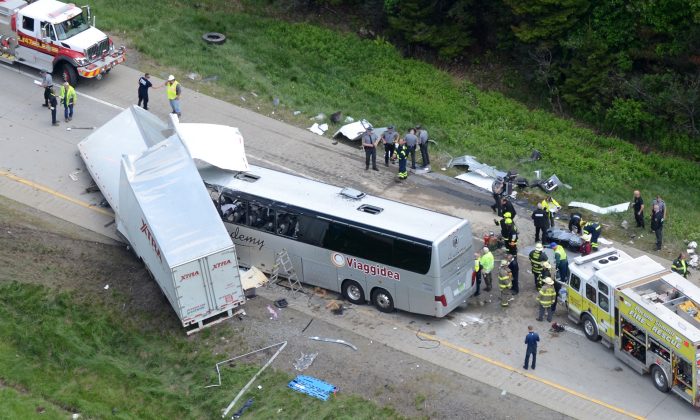 Authorities investigate the scene of a fatal collision between a tractor-trailer and a tour bus on Interstate 380 near Mount Pocono, Pa., Wednesday, June 3, 2015. (AP/David Kidwell)
HK Current Affairs

TOBYHANNA, Pa.—A tractor-trailer and a tour bus collided Wednesday on a highway in eastern Pennsylvania, killing two people and sending more than a dozen to hospitals.

The crash occurred shortly after 10 a.m. on Interstate 380 in the Pocono Mountain region about 75 miles northwest of New York City.

The mangled front end of the bus was left upright on the highway but wedged into the side of the tractor-trailer, which was sheared in half. The cab came to rest on its side in the woods next to the road, one of its axles torn off.

State police said a second tractor-trailer was reported to have been involved, but investigators were still trying to determine what happened.

Four of the injured were flown to hospitals, and the rest were taken by ambulance, said Matt Kislak of the Monroe County 911 Center.

The tour bus had the name of the Academy Bus company on its side, but a spokesman did not have any information on the accident. The tractor-trailer was leased by the Xtra Lease company, and the company’s attorney said officials did not yet know who was leasing the vehicle.

After hearing a loud crash, “all of a sudden people were screaming,” Johnny Walsh, who lives near the highway, told WCAU-TV in Philadelphia.

Pop singer Gloria Estefan suffered a broken vertebra when a tractor-trailer crashed into her tour bus on the same stretch of highway in 1990 while heading to a concert in Syracuse, New York.