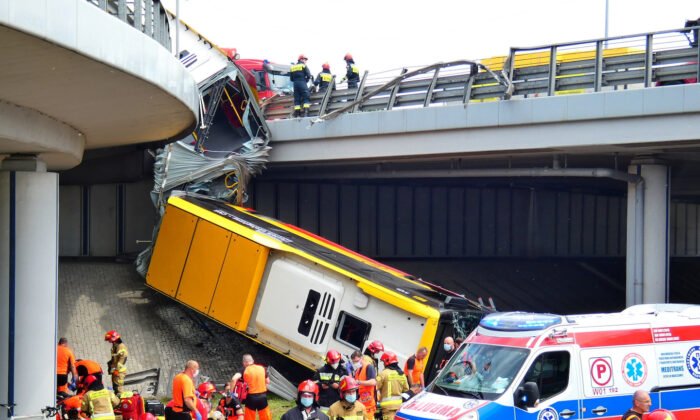 First responders treat the injured at the scene of a public bus crash, where the bus fell from a viaduct on the Armia Krajowa route in Warsaw, Poland, on June 25, 2020.(Agencja Gazeta/Dariusz Borowicz via Reuters)
Europe

WARSAW—A municipal bus in the Polish capital Warsaw plunged off a motorway bridge on Thursday, killing one person and injuring 17, authorities said.

Television footage showed half of the bus lying on a street below the bridge, while the rear half was still on the motorway at the beginning of a slip road.

Health Minister Lukasz Szumowski said one person was killed in the accident, which happened around midday, and that five of the injured were in serious condition. “At this moment they are fighting for their … lives,” he said.

Police were looking into the cause of the accident.

By Pawel Florkiewicz and Agnieszka Barteczko