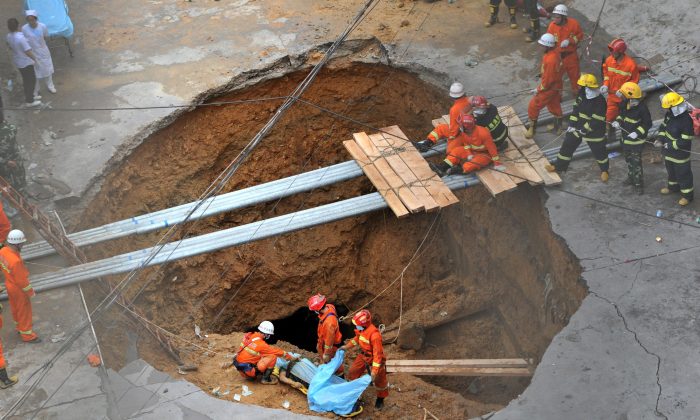 Rescuers move a dead body out of a sinkhole in Shenzhen, China on May 21, 2013. (AFP/AFP/Getty Images)
Social Issues

BEIJING—Six people were killed and another 16 injured when a bus toppled into a sinkhole caused by the sudden collapse of a stretch of road in northwestern China, the official Xinhua news agency reported on Jan. 14 citing local authorities.

Images and video footage shown by Chinese state media showed the bus falling into the hole, followed by a flash and smoke. Rescuers could be seen helping a person out of the sinkhole, from which only the rearmost part of the bus could be seen protruding.

Xinhua said more than 1,000 rescue workers and 30 vehicles have been dispatched to the scene. The accident occurred around 5:30 p.m. (0930 GMT) on Monday in Xining, capital of Qinghai Province, Xinhua said, adding that another four people were missing following the accident.

Xinhua said the hole was around 80 square meters in area and that the bus has been pulled out as of Tuesday.

Authorities were still investigating the cause of the accident and the victims have not yet been identified, Xinhua said.

Sinkholes are not unknown in China, where they are often blamed on construction works and the country’s rapid pace of development.

In December, three people fell into a giant sinkhole in Guangzhou City when the road suddenly collapsed near a construction site. A street-cleaning truck and a scooter plunged into the huge sinkhole, which was measured at approximately 38 meters deep. It was believed that there were two people inside the truck and one on the scooter.

Local authorities arrived three hours later. Instead of attempting to rescue the victims, they had the holes immediately filled with mud concrete, showing total disregard for those trapped underneath who may have still been alive.