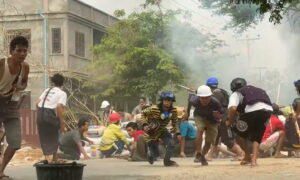 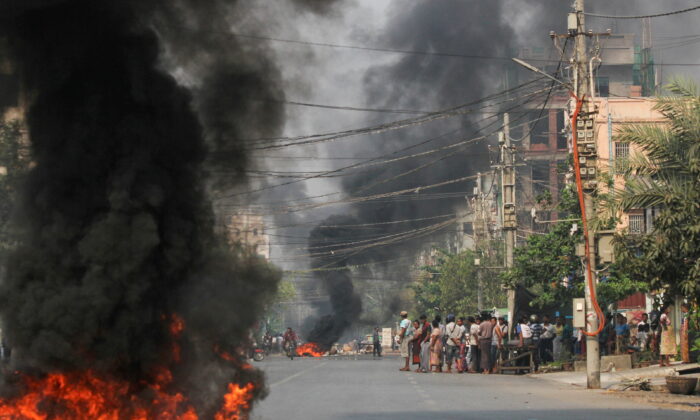 Tires burn on a street as protests against the military coup continue, in Mandalay, Burma, on March 27, 2021. (Stringer/Reuters)
Asia & Pacific

A Burmese (also known as Myanmar) military source recently told The Epoch Times in an exclusive interview that despair is spreading amongst Burmese people as the expected international support has not arrived and they are faced with an ongoing ruthless military crackdown.

The source, who spoke on the condition of anonymity, said that for more than a month, the Burmese people waited and waited, but international help didn’t arrive. “Can [the] people of Burma only count on ourselves?” he asked.

“Up to now, we’ve tried everything we can think of, but no one cares whether we in Burma live or die. We’ve exhausted all our means just to stay alive,” he said emotionally.

He revealed that even children have not been spared during the military crackdown on protesters.

“A child from Sagaing Region was abused by soldiers on the street. Seven-year-old Shwe Mi was crying when three Burmese soldiers violently burned his forehead and ears with cigarettes. He was kicked around like a ball, and then abandoned on the side of the road, where volunteers found him dying and took him to the hospital for resuscitation,” he said.

Burma Army Has A Hereditary System

According to the source, the Burmese Army has a hereditary system in which the son inherits the father’s position. Troops are organized into battalions based on clansmen. Soldiers from the same hometown are assigned to the same battalion.

“The army system is mainly hereditary, joining the army is a profession,” he said.

He revealed that since the protests started, Burmese soldiers in Yangon have stolen more than 20,000 motorcycles from protesters, and sold them in the second-hand market.

“Just recently, during the crackdown in Mandalay, five soldiers broke into a cell phone store, smashed the counter, and stole 119 cell phones. They even posted selfies. This sparked outrage across Burma. [The] soldiers’ image as heroes who fought bravely on the front line to protect the country is now replaced by bandits and thieves,” he said.

The source said, on March 25, an additional suspected CCP virus case was imported from outside the Kokang Autonomous Region, an area that borders southern China. Checkpoints for the CCP (Chinese Communist Party) virus were rendered useless as the military, which was supposed to manage them was deployed to suppress demonstrations.

At the same time, the Military Commission issued an order that all industries must resume work and production, and that those who disobey the order will be fined between 2 million kyats and 100 million kyats ($1,417 to $70,889) per day.

Those who do not pay the fine within 10 days will be severely punished according to the law on defiance of the government and economic management, with a maximum sentence of 40 years in prison.

According to an aide to Aung San Suu Kyi’s lawyer, her court appearance date has been postponed until April 1.

Since the military’s coup, there has been a ruthless crackdown on public protests and more than 400 people have died.

The source said Burma’s military-controlled Burma National Television declared that the current representative committees of both houses of the Burmese parliament are outlawed. In addition, members of parliament who support the National League for Democracy are wanted for treason.