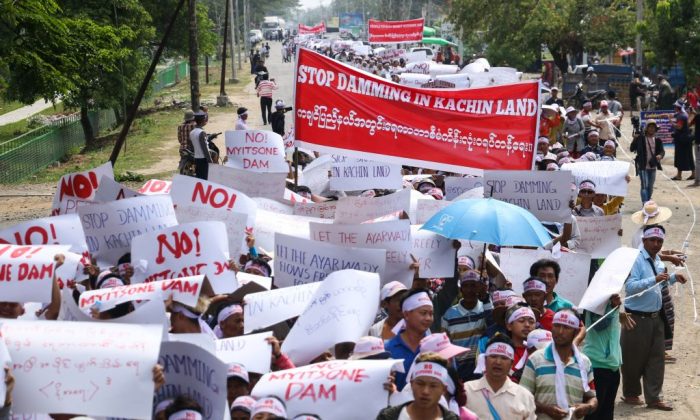 People from Kachin State take part in a protest against the Myitsone dam project in Waingmaw, near the Myitkyina capital of Kachin State, on April 22, 2019. (Zau Ring Hpra/AFP/Getty Images)
Chinese Regime

In Burma (also known as Myanmar), thousands of locals turned out for a protest against the construction of a Chinese-backed dam, just days before the country’s top leader is set to visit Beijing.

More than 8,000 residents of Waingmaw, a town in northern Burma’s Kachin State that borders China’s Yunnan Province, took to the streets to demand that construction of the Myitsone dam be put on hold, according to an April 22 report by Radio Free Asia (RFA).

“We have been protesting like this for eight or nine years now,” said local resident Lu Yar in an interview with RFA. “I wonder if the government can really continue to ignore this kind of opposition.”

Burma’s former military junta inked the $3.6 billion deal for the hydropower project located on the Irrawaddy River in 2009, according to Reuters, with Burma’s military-linked Asia World Co. and China’s state-owned utility company China Power Investment Corp. tasked with its construction.

Work on the dam was suspended in September 2011 by then-Burmese president Thein Sein after public protests. At the time, Aung San Suu Kyi, before she became the leader of the current quasi-civilian government in Burma, was one of the voices of opposition. Suu Kyi once said the dam would threaten the flow of the Irrawaddy River, and force the relocation of more than 10,000 people from 63 nearby villages, according to Reuters.

But after Suu Kyi became head of the ruling National League for Democracy party and the effective prime minister of the country, Beijing began to exact pressure to resume the dam’s construction.

In June 2016, a delegation headed by China’s ambassador to Burma traveled to Kachin to lobby for restarting the dam project, according to news magazine Frontier Myanmar.

Most recently, in November 2018, the magazine reported that the Chinese regime wanted the project to be packaged as part of its One Belt, One Road (OBOR) initiative, and conveyed the message that other OBOR projects in Burma wouldn’t proceed unless the dam is restarted.

Beijing rolled out OBOR in 2013 with the objective of increasing geopolitical influence, by building up trade routes linking China, Southeast Asia, Africa, Europe, and Latin America.

Frontier Myanmar reported that Beijing hasn’t publicly linked the dam project to OBOR, “acknowledgement, perhaps, that the project remains deeply unpopular and could potentially tarnish the image” of the initiative.

While Suu Kyi has remained silent on whether the project will resume, she did say in March that it’s important for her government to uphold investment projects approved by the junta, or investors might view her government as unreliable.

But locals are still against it. In February, another large-scale protest took place in Mitkyina, the capital of Kachin, and 10,000 people participated, including local residents, activists, political party leaders, and members of civil society groups, according to another RFA article.

Duwa Gumgrawng Awng Hkam, leader of the Kachin Democratic Party, told RFA in February that he considered Beijing’s push to have the Burmese government restore the project “an act of bullying.”

At the most recent protest, local resident Daung Kun called the project “a time bomb that could someday kill and wipe out people in Kachin state without a shot being fired.”

It remains to be seen if Suu Kyi will make a formal decision in the coming days, when she is scheduled to travel to Beijing for the second Belt and Road Forum held from April 25 to 27.

One Belt, One Road

Beijing considers the Myitsone dam a key element to its other OBOR projects in Burma, according to a January analysis article published by online news site The Irrawaddy.

China wants the electricity generated from the dam to power its OBOR projects in Burma, including three economic cooperation zones located in the border areas of Kachin and the nearby state of Shan, as well as an industrial park in Namjim, a village in Kachin.

Another reason for the push to build the dam is that Beijing may be intentionally creating a distraction from other investments in Burma. The Irrawaddy reported that locals have claimed that their lands were confiscated to make room for projects related to the China-Myanmar Economic Corridor (CMEC), but Chinese-Burmese operators have not paid them sufficient compensation. Similar complaints have dogged the Shwe oil and gas pipeline project connecting Burma’s western state of Rakhine with Yunnan, while fishermen also say they have lost their livelihoods as a result of the construction.

Beijing and Burma signed a memorandum of understanding for CMEC in September 2018 as part of OBOR. It includes plans for a railway and highway that will connect Yunnan’s capital of Kunming to the Burmese cities of Muse and Mandalay, which are, in turn, linked to Burma’s port of Kyaukpyu facing the Indian Ocean.

According to Burma’s English-language newspaper The Myanmar Times, the CMEC project also includes the development of Kyaukpyu port. China’s state-owned CITIC Group has a land lease on the port for 50 years, with a potential for extension for another 25 years.

China’s official OBOR website states that the Shwe pipeline, Kyaukpyu port, and CMEC are all designed to reduce China’s dependence on traveling the Strait of Malacca to transport energy imports from the Middle East.

Local media have since criticized China’s OBOR investments in Burma as a “debt trap,” akin to instances in Sri Lanka and the Maldives when land was leased to Chinese entities at high debt rates.

The New York-based Human Rights Watch used the Myitsone dam project as an example of Beijing’s lack of transparency and human rights in its OBOR ambitions in an article published on April 21. Human Rights Watch pointed out that critics have said the project would cause “large-scale displacement, loss of livelihoods, wide-scale environmental damage, and destruction of cultural heritage sites significant to the ethnic Kachin people.”