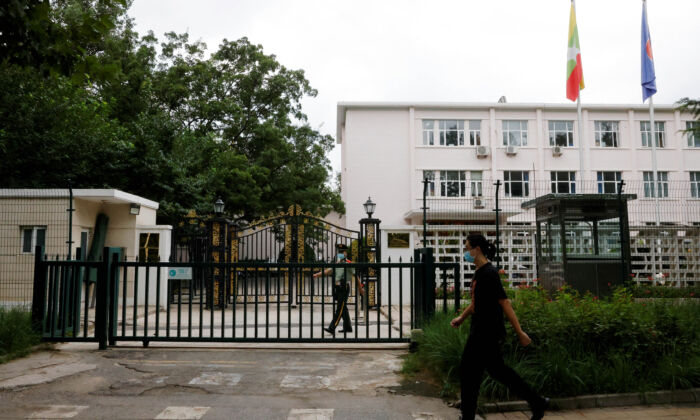 A man walks past a paramilitary police officer keeping watch outside the Burmese embassy in Beijing on Aug. 8, 2022. (Carlos Garcia Rawlins/Reuters)
China

BEIJING—Burma’s ambassador to China died suddenly on Sunday in the southwestern Chinese city of Kunming, according to an obituary in Burma state media and diplomatic sources in Beijing.

The obituary for Ambassador U Myo Thant Pe by Burma’s foreign ministry in a state newspaper on Monday did not specify his cause of death.

Diplomats in Beijing and a Chinese language Burmese media report said the cause was likely to be a heart attack.

U Myo Thant Pe was last seen on Saturday meeting a local official in the southwestern Chinese province of Yunnan which borders Burma (also known as Myanmar), according to a local news report.

The Burmese embassy in China did not immediately respond to a query for comment.

U Myo Thant Pe was appointed ambassador to China in 2019 and stayed in his post after Burma’s military took power in a coup in February 2021.

He was the fourth ambassador to die in China in the past year.

German ambassador Jan Hecker, 54, died in September, less than two weeks into his Beijing posting. Ukrainian ambassador Serhiy Kamyshev, 65, died in February during or shortly after a visit to a Beijing Winter Olympics venue.