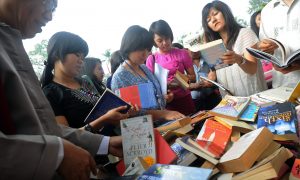 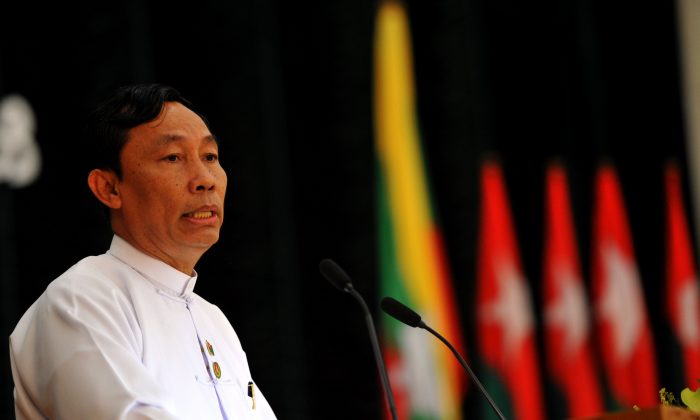 Shwe Man at the first conference of the Union Solidarity and Development Party (USDP) in Naypidaw, Burma, on Oct. 16, 2012. (Soe Than Win/AFP/Getty Images)
Opinion

The sudden removal of one of Burma’s most powerful men sent shockwaves through the diplomatic community in the old capital of Yangon, where foreign embassies are still located. It seemed more like a midnight coup than an ordinary leadership reshuffle—security forces in the new capital, Naypyidaw, entered the headquarters of the de facto ruling party, the Union Solidarity and Development Party (USDP), late Aug. 12. The following day, it was announced that Shwe Mann, the speaker of the Lower House of Burma’s bicameral parliament, a former general and anticipated by some foreign observers to be the country’s next president, had been ousted.

Despite the drama, his removal reconfirmed the widely held belief that the country’s military is not about to relinquish real power. The power shift in Naypyidaw is also unlikely to change the big powers’ attitudes toward the military in Burma.

Burma was viewed as edging toward a more democratic order with Shwe Mann favored by some as head of state.

Parliamentary elections are scheduled for Nov. 8. Early next year, an electoral college consisting of elected parliamentarians along with army officers will select the head of state of the country. After decades under solid military rule, Burma is supposedly edging toward a more democratic order. For many Western pundits, Shwe Mann was the favorite for the post, regarded as a “bridge” between the junta that had ruled the country until elections were held in November 2010 and the quasi-civilian government that took over in March 2011 as well as the democratic forces headed by the main opposition leader, Nobel Peace Prize laureate Aung San Suu Kyi.

Before becoming parliamentary speaker, Shwe Mann was considered the third most powerful man in the then-ruling junta. As a nominally civilian parliamentarian, he was often seen with Suu Kyi and began speaking in favor of reforms aimed at limiting the power of the military. Burma’s Constitution was drafted under military supervision and adopted in 2008 after a referendum dismissed by most observers as fraudulent. Under the constitution, the military holds 25 percent of all seats in Parliament and the regional assemblies. Since major changes in the constitution’s clauses require 75 percent approval, the military enjoys what amounts to veto power over any major changes in the country’s power structure.

Precisely what had made Shwe Mann popular among foreign diplomats, academics and think tanks became, in effect, the cause for his fall.

Precisely what had made Shwe Mann popular among foreign diplomats, academics, and think tanks became, in effect, the cause for his fall. A number of political reforms and seemingly liberal initiatives were introduced after the new government took over in 2011 such as the release of political prisoners, more press freedom, and the right of political parties to operate openly. Such steps were not taken because the military had little intention of giving up power. The strategy was to remain in power and, at the same time, improve the country’s image and its strained relations with the West, which had imposed sanctions on the junta for its abysmal human rights record. During that time, Burma had become heavily dependent on China. Internal military documents dated as far back as 2004 suggested that the country was losing its independence to its powerful northern neighbor.

The solution was simple: make some reforms—and the West would reciprocate by welcoming Burma back into the international community.

The United States in particular viewed the spread of Chinese influence in Burma with increasing concern. The reforms provided an opportunity for Washington to normalize relations with Naypyidaw. At the end of November 2011, then–Secretary of State Hillary Clinton traveled to the nation, the first top-level U.S. visit in half a century. A year later, President Barack Obama traveled to Burma. In May 2013, Thein Sein, became the first Burma president to visit the United States since 1966. Relations were on track as Burma distanced itself from China. The United States was no doubt pleased.

The military strategy: remain in power, improve the country’s image and end strained relations with the West.

Before long, it became increasingly clear that Burma was not undergoing an organic democratic transition from military dictatorship to elected civilian rule. Newspapers and magazines were not closed, but critical journalists and editors were charged with “libel,” “defamation,” and even “trespassing.” Student activists and people protesting against land seizures were thrown into jail. Some parliamentarians sought to change the constitution, but the military intervened to prevent that from happening.

Just before his second visit to Burma in November 2014, Obama said that Burma’s transition from military rule had not been as fast as hoped, and the government was “backsliding” on some reforms. Observers began to question whether Burma was really “backsliding”—or if the initiatives toward more openness were limited from the start.

Shwe Mann, evidently, stepped out of line by trying to go further. Longtime Burma observers see striking similarities between his ouster and a 2004 purge that saw the fall from grace of then prime minister and once powerful former intelligence chief Khin Nyunt. He was also a maverick. Like Shwe Mann, he amassed enormous political and economic power for himself and his family. Shwe Mann’s two sons, Aung Thet Mann and Toe Naing Mann, are prominent businessmen involved in numerous deals that certainly will come under scrutiny.

Was Shwe Mann reformer or opportunist who bet on the wrong horse by fraternizing with Aung San Suu Kyi?

And one cannot help but wonder if Shwe Mann is really a “closet liberal” or an opportunist who, in the end, bet on the wrong horse by fraternizing with Aung San Suu Kyi? In the late 1980s, he saw combat against Karen rebels along Burma’s eastern border, earning the honorific title “thura,” or brave hero. A cable from the U.S. Embassy in Yangon dated March 15, 2007, made public by WikiLeaks, stated that he had “utilized civilian porters, including women and children, on a massive scale during operations against Karen insurgents.” The cable’s headline read “Shwe Mann: Burma’s Dictator-in-Waiting,” and outlined his military career. He was also allegedly involved in the crushing of the 2007 so-called Saffron Revolution, a democracy movement led by Buddhist monks. In November 2008, Shwe Mann led a secret military delegation to North Korea, where he signed a memorandum of understanding on military cooperation. He visited an air base, a missile factory, and other defense industries near Pyongyang.

During his time in the army, Shwe Mann was a loyal officer, showing no sign of dissent. Ironically, he led the purge against Khin Nyunt and his henchmen in 2004. Now Shwe Mann’s own followers in the USDP and elsewhere may face the same fate as the former intelligence chief’s. Apart from being parliamentary speaker, Shwe Mann also led the USDP, a post now held by Htay Oo, a former major general close to Thein Sein who, in turn, has the backing of the military. The party’s General Secretary Maung Maung Thein and other Shwe Mann loyalists have also been removed. A “rejuvenated” USDP is poised to contest the November election.

These internal purges are unlikely to have much impact on Burma’s foreign relations. Washington may grumble, but no one there wants to push Burma back into China’s embrace, and China is pragmatic enough to adjust to the new realities so as not to jeopardize its fragile relations with Naypyidaw. Of special importance are gas and oil pipelines that China has built from the Bay of Bengal through Burma to the southern Chinese province of Yunnan. In July, Naypyidaw ratified the agreement to set up the China-led Asia Infrastructure and Investment Bank, a relationship that China won’t upset by interfering with an internal power struggle in Burma.

If anyone had doubts, it’s clear that the military still calls the shots in Burma.

Bertil Lintner is a former correspondent with the Far Eastern Economic Review and author of several books on Burma, including “Burma in Revolt: Opium and Insurgency Since 1948” and “The Kachin: Lords of Burma’s Northern Frontier.” He is currently a writer with Asia Pacific Media Services. Copyright © 2015 YaleGlobal and the MacMillan Center at Yale University