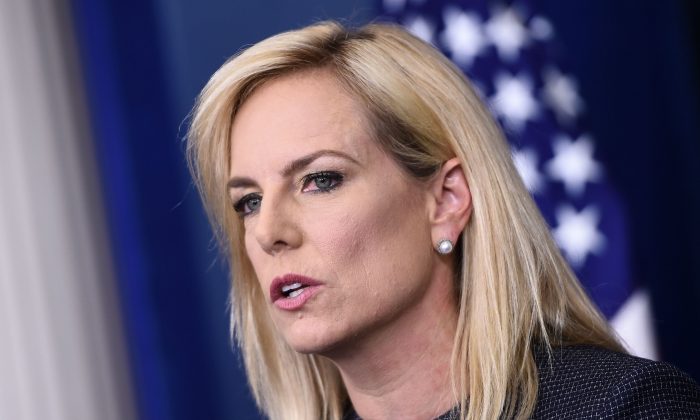 US Secretary of Homeland Security Kirstjen Nielsen speaks at a press briefing at the White House in Washington, DC on June 18, 2018. (BRENDAN SMIALOWSKI/AFP/Getty Images)
Trump Administration

Burma, Laos Hit With Visa Restrictions After Rejecting Deportees From US

Burma and Laos have been slapped with visa restrictions over their “lack of cooperation” in accepting expatriates who have been deported from the United States, The Department of Homeland Security (DHS) said.

In a July 10 announcement, the DHS said the two countries “have denied or unreasonably delayed accepting” their nationals who were ordered to be removed from the United States. As a result, Secretary of State Mike Pompeo ordered consular officers in both countries to implement visa restrictions that would apply to certain categories of visa applicants.

If the countries fail to respond appropriately, the scope of the sanctions may be expanded further. Both nations are on a list of nine “recalcitrant countries” that refuse to take back their deported citizens, effectively rendering the deportation process meaningless.

“The suspension will remain in place until Secretary [Kirstjen] Nielsen notifies Secretary Pompeo that cooperation on removals has improved to an acceptable level,” the DHS said in a statement.

The United States can only deport someone if the country in question agrees to receive the deportee. During former President Barack Obama’s second term, 23 countries were categorized as “recalcitrant” or “uncooperative” with deportations. Under President Donald Trump that number has decreased to nine, according to Voice of America, a government-funded radio network.

U.S. Immigration and Customs Enforcement (ICE) may even be forced to release dangerous criminals into the interior of the United States if countries like Burma and Laos continue to refuse their nationals.

As of July 9, the U.S. Embassy in Rangoon, Burma, has discontinued the issuance of all B1 and B2 nonimmigrant visas for current officials at the Director General level and above from the Burmese Ministries of Labor, Immigration, and Population, Home Affairs, and their immediate family members, with limited exceptions.

Similarly, the U.S. Embassy in Vientiane, Laos, has discontinued all B1, B2, and B1/B2 nonimmigrant visas for current officials at the same level at the Lao Ministry of Public Security, as well as their immediate families.