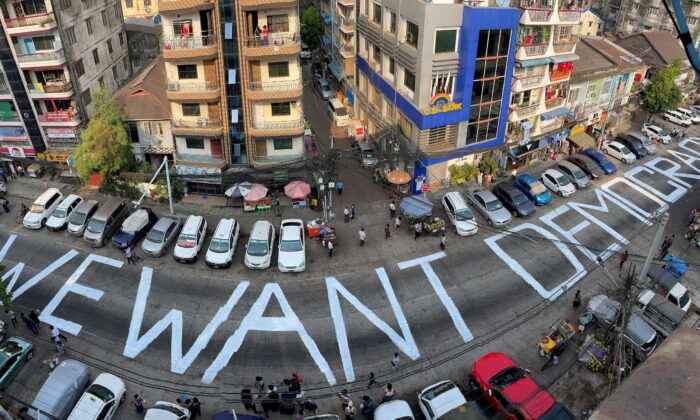 A slogan is written on a street as a protest after the coup in Yangon, Burma, on Feb. 21, 2021. (Stringer/Reuters)
Asia & Pacific

A court in military-ruled Burma (also known as Myanmar) jailed three prominent show business figures for three years each on Thursday for their part in protests against a February coup, media reported.

The military overthrew an elected government led by Aung San Suu Kyi on Feb. 1, triggering protests and turmoil that is still unfolding.

In the early days of the protests, huge crowds gathered in cities and towns with many actors and singers using social media to voice their support and some speaking at rallies.

Among those who took part were high-profile actor couple Pyay Ti Oo and Eaindra Kyaw Zin, who were arrested in April and charged under a section of the penal code that outlaws the spreading of dissent.

A court in the main city of Yangon jailed them for three years with hard labor, the Mizzima news agency and the BBC’s Burmese-language service reported.

Reuters was not able to contact the court or the couple’s lawyers for comment. A spokesman for the military junta did not answer a call seeking comment.

Famous actor-director Lu Min, who has starred in more than 1,000 films, received the same sentence on the same charge, Mizzima and the BBC reported. Reuters was not able to contact his lawyer.

Another celebrity, male model Paing Takhon, was sentenced to three years in jail with hard labor on Monday, according to his lawyer.

Burma has a thriving arts and entertainment scene. Much of the theatre and music is rooted in traditional themes but Burmese-language cover versions of Asian and Western pop songs are hugely popular and young Burma singers and actors have big followings.

At least 1,377 people have been killed and more than 11,000 jailed in a crackdown on protests and armed opposition since the coup, according to a tally by the Association for Assistance of Political Prisoners.

The military government disputes those numbers and says soldiers have also been killed in clashes.