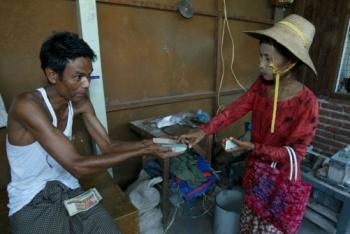 A Burmese woman deals her Jade stones with a shopkeeper at the Jade market June 15, 2003 in Mandalay, Myanmar. The country generates a considerable income from the mining of precious stones mostly from the northern part of Myanmar. It's a government run monopoly and all visitors must buy stones from licensed retail shops. (Paula Bronstein/Getty Images)
International

By Neil Campbell
Print
Burmese democracy activists are imploring visitors to the Olympics to boycott merchandise made from “Blood Jade,” a name given to high-quality jade mined under oppressive and dangerous conditions in Burma and sold for export by the country's military Junta.

In a report entitled, “Blood Jade: Burmese Gemstones and the Beijing Games,” released by the All Kachin Students and Youth Union (AKSYU), as much as 90 per cent of jadeite (a variety of jade) sold in China comes from mines in Kachin State along the Burma-China border.

"In addition to being a major source of foreign currency, the military-controlled industry is plagued with deplorable working conditions, an HIV/AIDS epidemic and environmental destruction," said the report. "Thousands have lost their land due to the expansion of mining areas. Deaths from pit collapses and company vigilantism are commonplace."

Although both European countries and the United States have placed severe restrictions on the import of gems from Burma (also called Myanmar), China is currently the largest importer of the precious stone.

Used as a war commodity for years in Burma, today jade generates money for the military Junta. Official export figures place it as the third highest foreign exchange after natural gas and agriculture products, valued at roughly $647 million USD in the 2007-2008 fiscal year. This is up more than 200 per cent from 2006-2007 when exports were valued at $297 million.

Nearly a third of those exports go to China.

Earlier this year, Inter Press Service (IPS) interviewed an Asian jade buyer who was visiting Burma and was shocked at the Chinese dominance of the market.

“Almost all the buyers of some 300 people were Chinese. Most of them were from the mainland, with a few from Hong Kong and Taiwan…This was for two hours, towards the end of a day’s auction."

Describing the jade, the buyer said that "one was the size of a car and another the size of a big table and these were what the Chinese buyers were attracted to. The initial auction price for a chunk of rough jade the size of a chair was one million Euros (approximately 1.5 million USD). The average price of the smaller pieces was about 300,000 to 500,000 Euros."

The jade the Chinese buyers are reported as favouring is a white-colored, transparent variety sometimes called “bra-fleshed jade” or "Maw Seezar Jade" as opposed to colored jadeites. Experts suspect this is the same white jade used as a backing for the 2008 Beijing Olympics gold medals.

The Chinese regime claims that the jade is from China’s Qinghai province. However, the Jade from Burma's Phakant jade mines is said to be of a much higher quality than the nephrite jade from Qinghai. Burma’s jade is also considered the most sought after in the Chinese jewelery industry.

Workers in Burma's open-pit jade mines are often paid as little as $1 USD per day while forced to work 12 hour shifts or longer, sometimes at night and with little or no breaks.

"The mining companies belong to cronies of the junta. They care little about abusing the people, their rights, and even destroying the environment," said Naw Law, a researcher with AKSYU, in an interview with IPS.