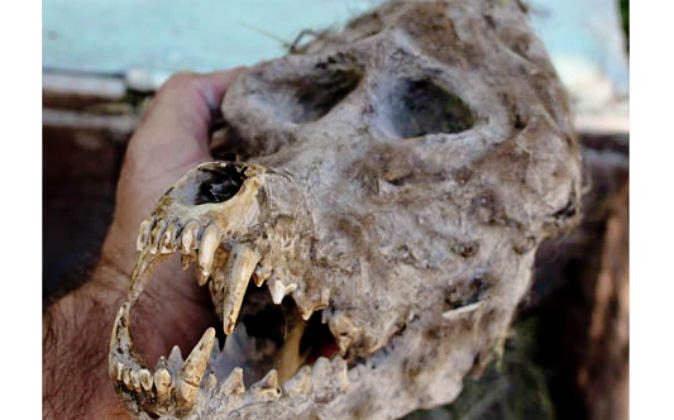 Werewolf-like skull found by a farmer in Macedonia. (Filip Ganev)
Beyond Science

A Bulgarian-born farmer, Trayche Draganov, claims to have found a box, chained shut, containing a werewolf-like skull while ploughing a new section of field in the village of Novo Selo, Republic of Macedonia.

The account was reported to Ancient Origins by historian Filip Ganev, who spent time in Novo Selo while conducting research for his book on the Balkan Wars. Mr Ganev met the farmer, who showed him the box containing the unusual skull. He reported that the skull appears wolf-like with the exception of an enlarged cranium, a trait found only in primate species.

Mr Ganev photographed the skull and shared them with government wildlife officials, who concluded that it was likely a wolf that suffered from Paget Disease, a condition which causes the skull to increase in size and appear more human-like.

Mr Ganev said that werewolves have been a staple of Balkan folklore since before recorded history. The legends vary from region to region as far as how and why one becomes a werewolf. Some believe that a person is born with the ability to shape shift into a wolf. Babies born with hair are said to have a proclivity for this. Other regions believe that a person who died in a mortal sin or made some other union with the devil would be reborn as werewolves. Though the differences are great, one thing that they all share is how to dispose of a werewolf corpse.

Werewolves were always dealt with by an exorcism by a parish priest, decapitation and burning of the body. It was thought that werewolves were to be killed on Saturday because that was the day they lay resting in their graves and could be easily caught. In the case of this Macedonian werewolf, it seems as though it was disposed of properly. At least until it was unearthed by a curious farmer.

Trayche does not fear that the spirit of the werewolf will be released and he is very proud of his discovery, showing it off to anyone who cares to look. He admits that others in the village do not share his flippant attitude and feel that it would have been better left in the ground. “Many of my neighbors are angry that I disturbed the vrkolak (werewolf),” said Trayche. “They say that I will be reborn as a werewolf. If that is now my fate, so be it. What is done is done.”