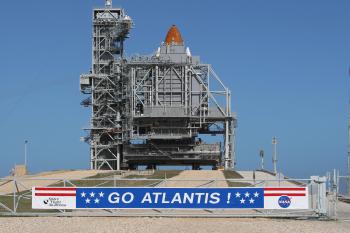 Open University (OU) scientists are investigating the survivor of a 553-day experiment on the outside of the space lab.

Harboured in a small chip of rock from a cliff-face in Beer in Devon, the bug, simply called OU20, is one of many hardy micro-organisms that hang out in extreme conditions on earth.

Other bacterial spores have survived in orbit and in space, but none as long as this.

OU researcher Dr. Karen Olsson-Francis told BBC News: “It has been proposed that bacteria could be used in life support systems to recycle everything… If we were to develop bases on the Moon or Mars, we could use bacteria for ‘bio-mining’—using them to extract important minerals from rocks.”

The small rocks went to the International Space Station (ISS) on the Atlantis space shuttle as part of the European Space Agency’s (Esa) Columbus science laboratory. They left from the Kennedy Space Center in Florida in February 2008 and were placed on the Technology Exposure Facility, exposed to extreme ultraviolet light, cosmic rays, and dramatic shifts in temperature.

No one knew if any of the many species of microbe would return to earth alive.

“These are just everyday organisms that live on the coast in Beer in Devon and they can survive in space,” Dr. Olsson-Francis said.