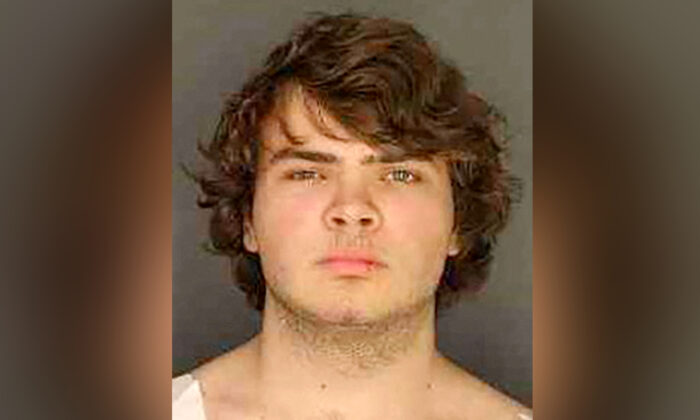 The suspect who allegedly opened fire on a supermarket in Buffalo, New York, on May 14 and fatally shot 10 people while injuring three more had been detained for a mental health check last year after making a school shooting threat, according to officials.

Payton Gendron, an 18-year-old white male, surrendered to police after shooting 13 people, 11 of whom were black, in an attack that officials believe may have been planned for months.

Authorities say the young man live-streamed the incident online after driving from several counties to get to the prominently black Buffalo area. Police called the shooting at the Tops Friendly Market a “hate crime and racially motived violent extremism.”

Gendron has been charged with first-degree murder, which carries a maximum penalty of life in prison without parole in New York. He has pleaded not guilty.

As new details emerge about the suspect, officials said on May 15 that the teenager had been taken into custody in 2021 and given a mental health evaluation after making a threat at his high school.

“The state police responded. They investigated. They interviewed the subject. And they felt at the time it was appropriate to have that individual brought in for a mental health evaluation,” Buffalo police commissioner Joseph Gramaglia said at a press conference on May 15.

Gramaglia told reporters that Gendron had been taken into custody and given a mental evaluation in June last year but was released about a day and a half later. The police commissioner did not provide further details regarding the teenager’s mental health check.

However, New York State police said in a statement on May 15 that troopers had been called to a high school in Gendron’s hometown of Conklin, New York, on June 8, 2021, for a report on a 17-year-old student making a threatening statement.

The statement did not identify Gendron but it stated that the student was taken to a hospital by police and given a mental health evaluation at a hospital. He was not charged criminally.

Authorities say that Gendron had driven to Buffalo from his home several hours away one day prior to the attack where he did “reconnaissance” work in the area before driving to the Tops Friendly Market on Saturday and opening fire. He live-streamed the incident on Twitch, a live video service owned by Amazon.com.

Officials also believe that the suspect penned a 180-page manifesto and posted it online prior to the attack, which detailed his desire to attack the Tops Friendly Markets.

That manifesto, which includes Gendron’s name, the same birthdate as his, and biographical details in common with the suspect, claims that the attacker chose Buffalo because of the strict gun control laws, because it has a high “black population percentage,” and because it “isn’t that far away” from where he had lived.

The Epoch Times has not been able to independently verify whether the manifesto was written by Gendron.

New York Gov. Kathy Hochul (D) on May 15 announced that she has directed $2.8 million in federal and state funding to be made available to help support individuals and families affected by the shooting. That includes funding for funeral expenses for victims.

“The past 24 hours have been traumatizing for New Yorkers, and my administration will spare no effort to ensure the victims of this act of terrorism by a white supremacist are receiving all the resources and support they need,” Hochul said in a statement. “The entire world is watching how we will come together as New Yorkers to overcome this unthinkable tragedy. Buffalo, my hometown, is the City of Good Neighbors and New York State will be good neighbors for them.”