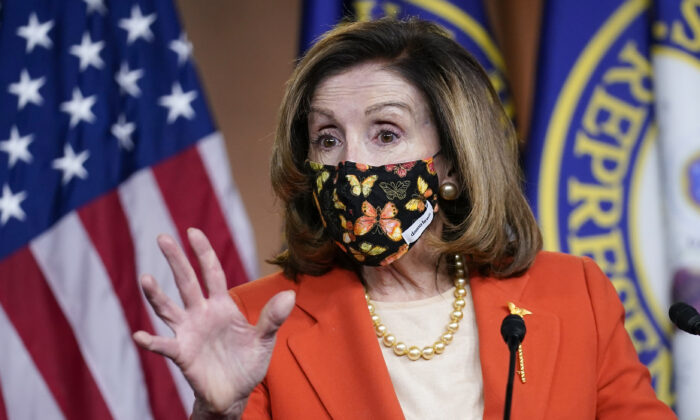 House Speaker Nancy Pelosi (D-Calif.) said on Jan. 28 that while she hopes Republicans in Congress will back President Joe Biden’s $1.9 trillion pandemic relief bill, Democrats are ready to adopt the sweeping legislation unilaterally as part of a budget reconciliation process. She said a related budget resolution would be brought to the House floor next week.

“We will pass a reconciliation bill, if we need it,” she told reporters at her weekly news conference, adding that “we’re not taking any tools off the table.”

As a preliminary step to a potential “reconciliation” process, which would allow Democrats to avoid having to get Republican buy-in on Biden’s relief bill and pass it by a simple 51-vote majority, Democrats will bring a budget resolution to the floor next week.

“By the end of the week, we’ll be finished with the budget resolution, which will be about reconciliation, if needed,” Pelosi said.

Her remarks follow a letter to Democrats on Jan. 27, in which Pelosi said that committees are already working on “coronavirus relief legislation as a basis for reconciliation, should that step be needed.”

Pelosi’s comments come as Democrats are signaling they don’t intend to wait for Republican buy-in on Biden’s sweeping relief bill proposal, which some GOP lawmakers have panned as an expensive, unworkable liberal wish-list.

Sen. Chuck Grassley (R-Iowa), in a statement last week, warned Biden not to exploit the pandemic to push a laundry list of liberal causes in the relief package, characterizing the president’s bid as “a big government take-over of the U.S. economy.”

“It’s reckless to borrow another $2 trillion on top of $4 trillion already in the pipeline. While more pandemic relief is needed, some of the line items are a political pipe dream for progressives,” he said.

The sweeping bill includes $400 billion to expand vaccinations and to reopen schools, $1,400 direct payments to households, as well as other priorities, including raising the federal minimum wage to $15 an hour.

Sen. Bernie Sanders (I-Vt.), the incoming Budget Committee chair, is preparing a budget blueprint, which will contain instructions to certain authorizing committees to include in it pieces of the relief bill. The Budget Committee assembles these items into one big bill, which has a special status in the Senate and, like the budget, it cannot be filibustered, meaning it will not require the 60-vote threshold to pass.

“We are going to use reconciliation, that is 50 votes in the Senate plus the vice president, to pass legislation desperately needed by working families in this country right now,” Sanders told CNN’s “State of the Union” program on Jan. 23.

In 2017, Senate Republicans used budget reconciliation to pass tax cuts, a move that Sanders sharply criticized, saying the GOP was “abusing this process.”

Asked about his criticism of Republicans for what he was now proposing to do with the pandemic relief bill, Sanders told CNN that the dire circumstances brought about by the outbreak justify the move.