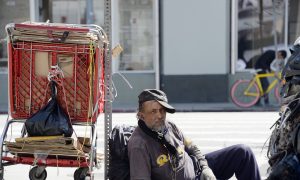 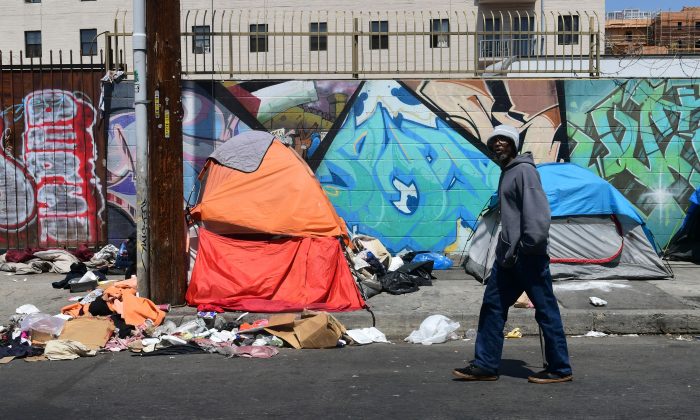 A pedestrian walks past tents and trash on a sidewalk in downtown Los Angeles on May 30, 2019. (Frederic J. Brown/AFP/Getty Images)
Southern California

During an interview on Periscope, Dr. Drew, as he’s commonly known, told Adams that just after Los Angeles had to deal with with a typhus outbreak, the city should brace for an imminent outbreak of the bubonic plague — the same disease that killed 60 percent of the European human population in the late Middle Ages.

Explaining that he had predicted the typhus outbreak before the news broke, Dr. Drew said that it shouldn’t take long for the state’s failure to deal with the growing rodent population to further catch up with its residents, alerting that the current conditions are perfect for the plague.

“[I]f you look at the pictures of Los Angeles, you will see that the homeless encampments are surrounded by dumps,” he told Adams.

Furthermore, he said the plague is endemic to the area, and the city is one of the few in the country with no rodent control plan.

“People defecate there, they throw their trash there, and the rats just proliferate there.”

According to a July 16 report by the political action committee Reform California, the spiking homeless population is making Los Angeles a hot spot for rodents. Unfortunately, the state’s restrictive policies regarding the eradication of rodents is also contributing to the problem.

Since 2014, the Los Angeles Department of Recreation and Parks stopped using second-generation anticoagulant rodenticides (SGARs) after the state’s Department of Pesticide Regulation (CA DPR) proposed restricting these products due to environmental concerns.

Now, legislation such as AB 1788, Reform California argued, could further worsen the situation by banning the use of SGARs across the state. And as explained by Dr. Drew, as the number of homeless dwellers grows and the rodent problem remains unaddressed, adding penalties for those using effective rodent control methods could only make matters worse.

“We have the three prongs of airborne diseases, tuberculous is exploding, rodent fleas,” Dr. Drew told Laura Ingraham during a recent interview. “Sanitation has broken down. We had a typhus outbreak last year, we will have typhus this summer. I’m hearing from experts that bubonic plague is likely, it’s already here, it will get onto the rat fleas. And then now finally we have this oral-fecal route contamination which is typhoid fever. Three cases. One confirmed, probably three. This is unbelievable.”

Dr. Drew said the “entire population is at risk.”

According to Reform California’s report, what is needed is a more serious approach to the rodent problem, including declaring a public health emergency, working with local government, and launching a public education campaign.

Some reports have attempted to link a rise in rat activity with climate change, despite a lack of studies confirming such a link. Meanwhile, experts who contributed to Reform California’s report said environmental factors aren’t to blame for the rodent increase.

“The cause of this recent spike in the rodent population cannot be explained by mere environmental factors such as increased rain in the Fall of 2018,” the report stated. “Indeed, data shows the increase in rodent population has occurred during both the drought period and the recent period of rains.”

In his interview with Adams, Dr. Drew said that since California isn’t using the most effective methods to put an end to this problem, the state may soon need the federal government’s help.

President Donald Trump recently expressed concern over the rising homelessness issue both in Los Angeles and in San Francisco, saying he was looking into intervening. However, he did not lay out a plan to address the rodent problem.

According to Dr. Drew, if we start seeing outbreaks of diseases such as the bubonic plague in Los Angeles, the federal government will have no other choice but to send out help through the Federal Emergency Management Agency (FEMA) and the National Guard.

“I have a government that is ignoring the basic needs of human civilization,” said Dr. Drew. “How many people must die before you change your philosophy?”