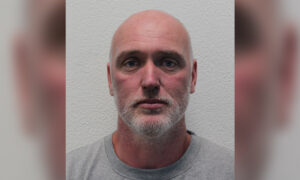 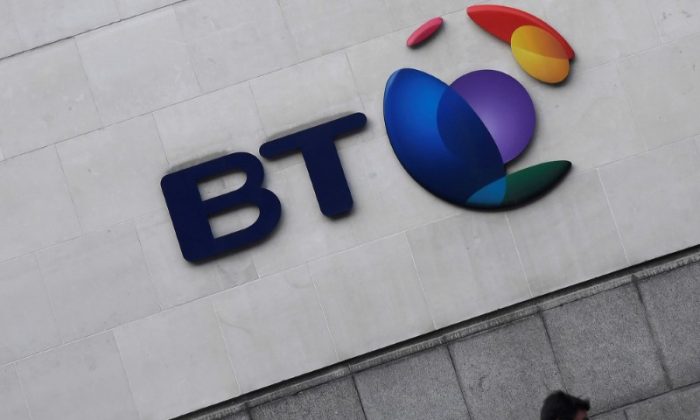 The logo for the British Telecom group is seen outside of offices in the City of London, Britain, Jan. 16, 2017. (Reuters/Toby Melville/File Photo)
UK

LONDON—BT will cut 13,000 managerial and back-office jobs and move to a smaller London base in the latest attempt by the boss of Britain’s biggest telecoms group to rebuild from an accounting scandal and multiple pressures on its business.

“We need to make ourselves more efficient, we need to create oxygen within the business,” he told reporters on Thursday, May 10.

But a failure to hit a revenue target in the last quarter and a disappointing outlook for no growth in profit for a couple of years sent the shares down 9 percent to five-year lows.

Since he took the top job in 2013, Patterson has spent billions of pounds on TV sports rights, network investment and customer service improvements, all while trying to keep regulators, pension fund trustees and investors on side.

On top of that, fraud was discovered in Italy while the group was also blindsided by a downturn in corporate and public sector markets, undermining confidence in his leadership.

Patterson tried to placate shareholders by maintaining the full-year dividend on Thursday, and he also agreed a new pension funding plan.

“BT has now firmly gone from being a reasonably predictable growth story, an outlier in the incumbent landscape across Europe, to becoming a cost restructuring story,” they said.

“Quite a remarkable shift in fortunes with an outlook that is well shy of our expectations.”

Traders said guidance for the current financial year was lower than expected, while fourth-quarter revenue fell short of targets, showing the challenges facing Patterson as he seeks to rebuild a group that employs more than 100,000 staff.

BT, which owns Britain’s biggest mobile operator EE, said it would hire about 6,000 new engineers and front line customer service staff to support its roll out of fibre and 5G networks.

Around two-thirds of jobs cuts will fall in Britain, with the rest coming being removed abroad, he said.

The company has been based at the BT Centre, near St Paul’s Cathedral in the City of London since it was privatized in 1984 but will now move to smaller premises in the capital.

“If we compare how we manage the business with our peers, we’re frankly too complex and overweight. This is a big deal,” said Patterson.

BT has faced growing competition from nimble young rivals including Sky which has expanded from being a pay TV company to offer a range of broadband services. BT’s expansion into television was an attempt to defend its customer base.

Throw of the Dice

The job cuts, the highest number by the former monopoly since 2008, will save 1.5 billion pounds in costs in three years, the company said. The restructuring will cost 800 million pounds to implement.

Some of the proceeds will go toward increasing capital expenditure on new fiber fixed-line connections and 4G and next generation 5G mobile networks to about 3.7 billion pounds over the next two years.

The new strategy is the latest throw of the dice from Patterson who won early plaudits from investors when he moved BT into sports TV and mobile.

That goodwill came to an end when the group delivered a major profit warning in January 2017 due to problems at its multi-national Global Services division and the discovery of the Italian scandal.

The shares, down 22 percent this year, are trading at levels last seen in 2012.

Patterson gained some breathing space on its pension, which had a deficit of 11.3 billion pounds at the end of June, on Thursday by agreeing a 13-year funding plan.

BT said its outlook for the current financial year, to end-March, would see a 2 percent drop in underlying revenue, while adjusted core earnings would be in the range 7.3 billion-7.4 billion pounds, down from 7.5 billion pounds in the last year.