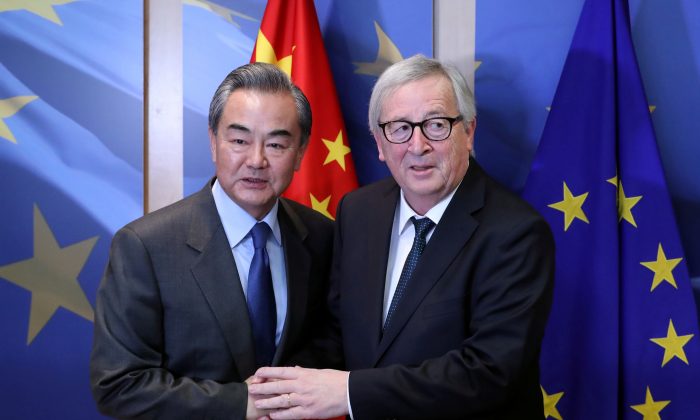 Brussels Pushes EU Leaders to Get Tough on Trade With China

BRUSSELS—The European Union executive is urging EU leaders this week to get tough on trade with Beijing and use their 2.4 trillion euro ($2.7 trillion) market in public tenders as leverage to pressure countries such as China to open up.

The bloc has sought to avoid taking sides in a multi-billion dollar trade war between Washington and Beijing, but has become increasingly frustrated by subsidies and state involvement in the Chinese economy, and what it sees as the slow pace of change.

European Commission Vice President Jyrki Katainen told Reuters that the time was gone when China, the EU’s second largest goods trading partner, could argue that it needed to protect its developing economy.

“The old narrative is absolutely obsolete,” he said in an interview.

EU leaders will debate relations with China over dinner at a summit on March 21.

The Commission now wants to revive a proposal that could lead to the bloc limiting foreign firms’ access to public tenders if there is discrimination against EU firms in their home procurement market.

In such cases, a penalty surcharge of up to 20 percent would be applied to the foreign bids.

The Commission proposed its International Procurement Instrument (IPI) in 2012 and 2016, largely at the instigation of France, but faced resistance from several EU countries.

However, it believes there is more willingness now to be firm with China, notably after EU members late last year backed a system of screening foreign investments for threats to strategic technologies and infrastructure.

“Once they saw concrete acquisitions, everybody started to back the (screening) proposal,” Katainen said. “The same thing will happen with IPI as it’s a way to improve reciprocity.”

Neither the screening law nor the public procurement proposal mention China by name, but the Commission mentioned both in its 10-point action plan on EU-China relations, published last week.

A German EU diplomat welcomed the paper as a whole, calling it “comprehensive and courageous.” However, the northern EU members that are most enthusiastic about free trade fear that the measure smacks of protectionism and could harm taxpayers by shutting out cheaper Chinese providers, for instance.

Of the 10 countries most discriminated against, five are European, with Germany at the top. However, China comes second, and more than 40 percent of the restrictive measures are applied in or by the United States.

Commission officials said the proposal had in mind restrictions in India, Indonesia, Russia, and Turkey, but they would not be drawn on the U.S. Buy American Act.