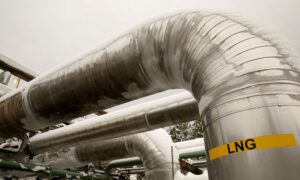 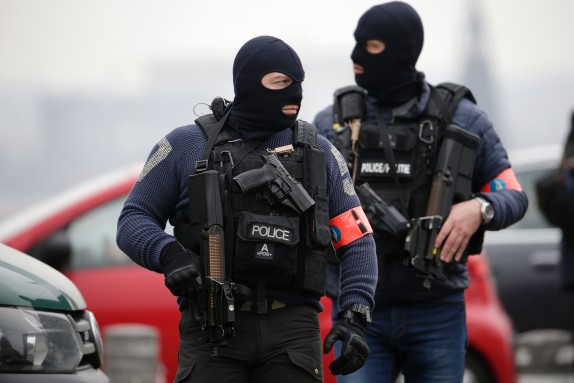 Special police forces stand guard outside the Council Chamber of Brussels on March 24, 2016 during investigations into the Paris and Brussels terror attacks. More than 30 people have been identified as being involved in a network behind the Paris attacks on November 13, with links now established to this week's bombings in Brussels. (Kenzo Tribouillard/AFP/Getty Images)
International

Although the Brussels attacks dominated headlines, more than 200 people were killed in eight terror attacks ranging geographically from Africa to Asia, and Europe.

A suicide bomber squeezed his way through security at a courthouse in Shabqadar, killing 17 people and injuring 31, according to a Dawn report.

Police said an officer tried to stop the bomber, but he forced his way through and detonated his vest after being toppled by another officer while heading toward a more crowded area.

The attack was believed to be carried out by the Taliban as an act of revenge for the hanging of convicted killer, Mumtaz Qadri.

North African affiliates of Al Qaeda opened fire at a resort just outside the city of Abidjan, killing 16, according to a New York Times report.

The bodies of 14 civilians and two members of the country’s special forces lay dead on the sand, as well as six of the gunmen.

Al Qaeda in the Islamic Maghreb took credit for the attack, which occurred in Grand-Bassam on the first sunny Sunday in weeks.

Prior to the shootings, French authorities warned that the Ivory Coast and Senegal could be targets.

Both locals and foreigners were among the victims.

Kurdistan Freedom Hawks (TAK) set off a car bomb in Kizilay Square in Turkey’s capital city Ankara, killing at least 37 and wounding more than 130, according to a BBC report.

TAK claimed the attack in an online statement, saying it was in revenge for the military’s work in the Kurdish-majority south-east.

The suicide car bombing occurred in a busy transport and commercial district in the center of the city.

In their statement, TAK said its intentions were to kill security forces and not civilians—although warned further civilian casualties would be inevitable.

A bus exploded in Peshawar, a city frequently targeted by the Taliban, killing 15 and injuring at least 30, according to a BBC report.

The report stated that several government employees from nearby cities were on the bus, which exploded as it passed a main road during a busy morning period.

During morning prayer, 22 worshippers were killed and another 18 were injured when two female suicide bombers detonated themselves at a mosque in Maiduguri, according to a New York Times report.

It is believed that one of the bombers was dressed as a man, with the intention of gaining better access to the crowded areas of the mosque.

The first explosion occurred inside, the second outside the building just a few minutes later.

Maiduguri has been a longtime target of the Islamic militant group Boko Haram—a terrorist group that has been increasingly using women suicide bombers.

A main shopping street in Istanbul was the site of a suicide bomb attack, killing 5 and wounding another 36, according to a report by The Guardian.

The bomb went off outside the governor’s office, on the corner of Balo Street and İstiklal Avenue.

Of the 36 injured, 12 were foreign. Six were Israeli—two of whom had dual Israeli-U.S. citizenship—two were Irish and the four others were from Dubai, Germany, Iceland, and Iran.

No terrorist organization has yet to claim responsibility.

Several gunmen led an attack on a European Union military training center located in the nation’s capital city of Bamako, but no personnel were killed, according to Reuters.

After the attackers attempted to forcefully enter the building, security opened fire immediately killing one of them—the others then fled. Two attackers were subsequently arrested and are being interrogated, according to the country’s internal security minister.

A witness told Reuters that there were nearly 600 EU personnel in the building at the time.

The bag the dead attacker was carrying was believed to contain explosives. Photos taken of him estimate he was in his 20s.

Two explosives were detonated by suicide bombers at the Zaventem Airport and one on the Metro system in Brussels, killing 31 people and wounding nearly 300.

“What we feared has happened,” Belgian Prime Minister Charles Michel said following the bombings. “In this time of tragedy, this black moment for our country, I appeal to everyone to remain calm but also to show solidarity.”

The European Union’s security had been preparing for an attack in the weeks prior, fearing the terrorist group ISIS was readying to commit an act.

ISIS released a statement claiming the attacks shortly after they happened, stating it was in response to Belgium’s support of the international effort against the group.

A branch of the Pakistani Taliban killed at least 72 people and injured 300 in an Easter Sunday suicide bombing in the city of Lahore, according to Reuters.

The attack, coordinated by the Jamaat-ur-Ahrar sub-group, occurred in one of the city’s largest parks.

The group deliberately targeted Christians in an effort to go after religious minorities.

Many of the victims were women and children.