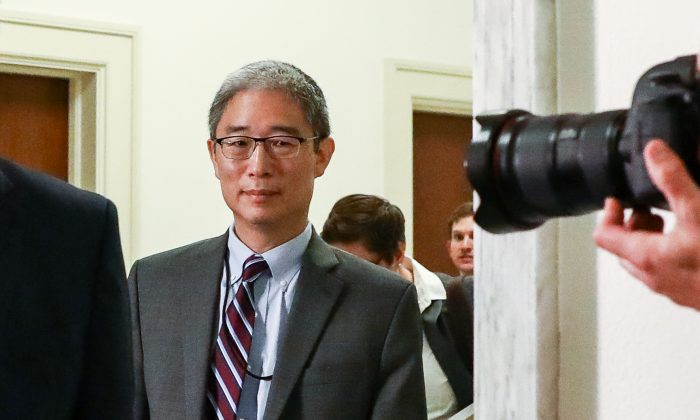 Bruce Ohr, a Justice Department official demoted from the posts of associate deputy attorney general and director of the Organized Crime Drug Enforcement Task Force, leaves for a lunch break from a closed hearing with the House Judiciary and House Oversight and Government Reform committees on Capitol Hill in Washington, on Aug. 28, 2018. (Samira Bouaou/The Epoch Times)
US News

Ohr told FBI agents during a Nov. 22, 2016, interview that “reporting on Trump’s ties to Russia were going to the [Hillary] Clinton campaign, Jon Winer at the U.S. State Department and the FBI,” according to one of the notes made public late on Aug. 8 by Judicial Watch.

Winer was a senior aide to then-Secretary of State John Kerry.

The nonprofit government watchdog has repeatedly used the Freedom of Information Act (FOIA) to break major stories in the Trump–Russia collusion investigation saga, and released 34 pages of FBI 302s, the form that agents use to document their interviews.

The latest documents were obtained after the nonprofit’s lawsuit following the government’s failure to respond to its Aug. 6, 2018, FOIA seeking the Form 302s.

Ohr was removed from his position in December 2017 for failing to disclose his wife Nellie’s employment with Fusion GPS, the opposition research firm at the center of the investigation. Nellie Ohr is a Russian specialist.

Steele was retained by Fusion GPS for the task and was paid by Clinton’s 2016 presidential campaign and the Democratic National Committee (DNC), then under her control.

His materials were compiled into the infamous “Steele dossier” that was used by the FBI to obtain warrants from the Foreign Intelligence Surveillance Act (FISA) court to spy on low-level Trump campaign aide Carter Page.

In the Nov. 22, 2016, interview, Ohr told FBI agents that Steele was “desperate that Donald Trump not get elected and was passionate about him not being the U.S. president.”

The same note also said, “Ohr knew that Glen Simpson and others were talking to Victoria Nuland at the U.S. State Department.” Simpson, a former Wall Street Journal reporter, is president of Fusion GPS.

Simpson’s firm was retained by Perkins Coie, a prominent Washington law firm that represented the DNC and the Clinton campaign.

Other notes released by Judicial Watch showed that:

“These new Bruce Ohr FBI 302s show an unprecedented and irregular effort by the FBI, DOJ, and State Department to dig up dirt on President Trump using the conflicted Bruce Ohr, his wife, and the Clinton/DNC spies at Fusion GPS,” Judicial Watch President Tom Fitton in a statement accompanying the release of the documents.

“The FISA courts weren’t informed of this corrupted process when they were asked to approve and reapprove extraordinary spy warrants targeting President Trump,” Fitton said.

Judicial Watch previously uncovered documents showing Ohr received a $28,000 bonus during the period covered by the 302s. An Obama appointee, Ohr worked for then-Attorney General Loretta Lynch. The $28,000 bonus was almost double his previous bonus of $14,500 in 2015.

“These documents will raise questions as to whether the conflicted Bruce Ohr, who the FBI used to launder information from Christopher Steele was rewarded for his role in the illicit targeting of President Trump,” Fitton said in a June 7 statement.