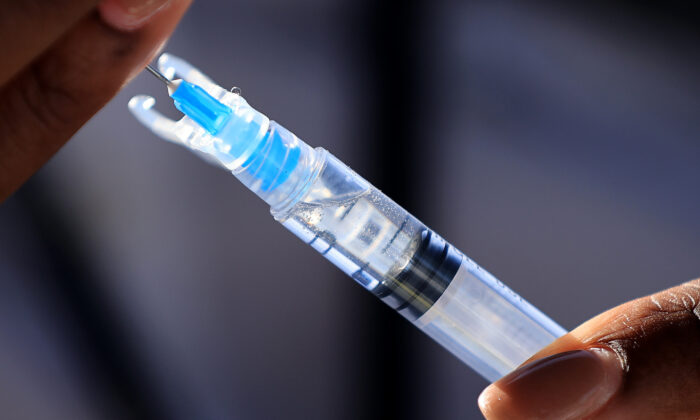 A COVID-19 vaccine in Washington in a May 6, 2021, file image. (Chip Somodevilla/Getty Images)
US News

A top university in Rhode Island isn’t denying that a student at the school was hospitalized with heart inflammation after receiving a COVID-19 vaccine.

Russell Carey, an executive vice president at the school, said in a recent missive (pdf) that the university wouldn’t comment on a specific student’s medical condition.

“In regard to the second- and third-hand claims outlined in your letter about an alleged reaction to the vaccine by a Brown student: To provide information about a specific student’s medical condition without consent would violate federal privacy law,” he said.

Carey was responding to doctors and a state lawmaker who questioned the school over the hospitalization, which was reported by a cardiologist who was on call at a school-linked hospital when it occurred in 2021.

Dr. Andrew Bostom, a former Brown University professor, recorded a call with the cardiologist. The cardiologist told The Epoch Times that the call happened, although he backtracked on the student’s vaccination status and said he assumed but didn’t know whether the student was vaccinated.

“The University provides detailed information on vaccine risks and benefits without any violation of student privacy, and this will remain our approach moving forward,” Carey said.

Several records seem to line up with the hospitalization the cardiologist described, including a case reported to the Vaccine Adverse Event Reporting System, a record from the Rhode Island Department of Health’s hospital database, and a case report included in a study by Brown University cardiologists. The records describe post-vaccination heart inflammation and state that the male was discharged after several days.

“I’m not surprised that they still remain in denial. I think perhaps they have a legitimate concern about litigation,” Bostom told The Epoch Times on Aug. 31.

Lifespan’s risk management team was alerted to questions about the hospitalization, according to an email Dr. Athena Poppas, director of the Miriam Hospital and professor of medicine at Brown University, sent to Bostom in August. Miriam Hospital is where the student went, according to the cardiologist. Lifespan hasn’t answered questions about the hospitalization.

“Moreover, the University has not shared that information (again, anonymously) with its own most at risk, healthy young male 18 to 24 year old student population. Such concealment violates the ethics of risk/benefit-based informed consent, which applies to all vaccinations, including those that are deemed mandatory,” Morgan said.

In a new letter dated Aug. 29 and released on Aug. 30, Morgan said labeling recorded conversations with an on-call cardiologist “as ‘2nd or 3rd hand’ evidence, is risible.”

“Moreover, almost equally risible is the dismissal of three distinct validating, deidentified forms of corroboration of the Cardiologist informant’s own validated narrative,” she wrote.

Morgan and the doctors said they never asked the university to provide information about “a specific student’s medical condition without consent.”

“We did request that Brown acknowledge the HIPPA compliant information we have accumulated, and acknowledge the case occurred, as described in March 2021,” they said. “We note, again, the glaring failure by Brown to make this acknowledgment, deidentified, while mendaciously invoking ‘federal privacy law.'”

No Mention of Heart Inflammation

Brown University hasn’t responded to questions after its letter to Morgan, including why its COVID-19 website doesn’t mention myocarditis, pericarditis, or myopericarditis.

The forms of heart inflammation have manifested in hundreds of Americans after COVID-19 vaccination. U.S. data and studies show the population most at-risk is teenage males.

Heart inflammation usually forces students to stop nearly all physical activity for a period of time and take other precautions, according to cardiologists. Some youth have died after suffering from heart inflammation following receipt of a COVID-19 vaccine.

Carey said, “Public health and medical guidance has remained consistent and clear that the risk of COVID-19 infection itself, including for heart problems, greatly exceeds the risk of myocarditis or other side effects from vaccination.”

He didn’t provide a citation. Some research has concluded that the risk of heart inflammation is greater for some groups after COVID-19 infection, but most studies on the subject peg the risk from vaccination higher for at least young males.

“I can tell you that after researching this issue now for 18 months, they’re just wrong,” Bostom said. “That’s not what the science is saying.”