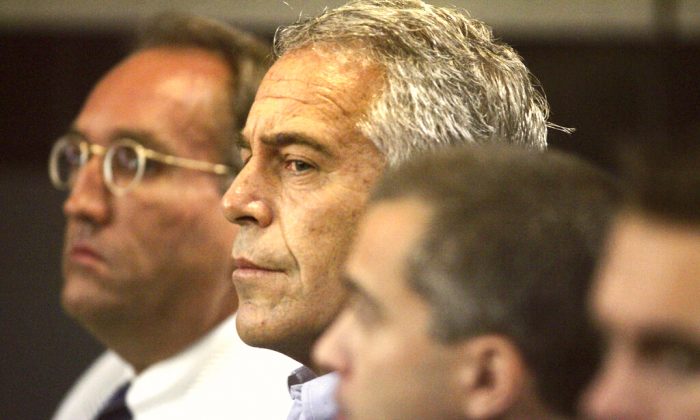 A former director at the Massachusetts Institute of Technology (MIT) who allegedly played a role in concealing the MIT Media Lab’s financial relationship with recently deceased sex offender Jeffrey Epstein, has been placed on leave from his current position at Brown University.

Peter Cohen, a former director of development and strategy at MIT, was named in a Sept. 6 report by The New Yorker that described how the lab continued to accept gifts from Epstein even though he was listed as “disqualified” in MIT’s official donor database. The New Yorker cited dozens of pages of emails and other documents they obtained.

Cohen began working at Brown University in October 2018 as the director of development for computer and data science initiatives, according to Brian E. Clark, a spokesperson for Brown. Clark told The Epoch Times on Sept. 9 that the university is aware of the allegations against Cohen from when he was employed at MIT.

“Brown has not in its history received any funds from Jeffrey Epstein,” Clark said via email. “We are engaged in a review of available information regarding Mr. Cohen in the context of Brown University policies, core values and the University’s commitment to treat employees fairly.”

Clark confirmed Cohen had been placed on administrative leave, pending the results of the review. He said the review “does not constitute any adverse determination, and it would be premature to speak to any potential outcomes.”

“Consistent with Brown’s responsibility as a fair employer, details of assessments of individual employees are not discussed publicly,” Clark said. “In general terms, I can share that Brown conducts reviews under a range of circumstances, which include assessing alignment with Brown’s values, the University Code of Conduct and other policies, compliance with any applicable regulations, laws and statutes, and capacity to perform the requirements of an appointed position.”

Attempts to reach Cohen for comment were unsuccessful. When reached by email, an automatic response said he was “currently out of the office and will not be accessing emails.” The response then directed all inquiries to Catherine Nellis, an assistant vice president of development at Brown. Nellis did not immediately respond to a request for comment from The Epoch Times.

The MIT Media Lab’s director, Joi Ito, resigned on Sept. 7, a day after The New Yorker report was published. In one instance in 2014, Ito wrote in an internal email that the lab had received a “$2M gift from Bill Gates directed by Jeffrey Epstein.”

At the time, Cohen replied to Ito’s email, saying, “For gift recording purposes, we will not be mentioning Jeffrey’s name as the impetus for this gift.” A spokesperson for Microsoft founder Bill Gates denied to The New Yorker that Epstein directed any grants from Gates.

In other 2014 emails from Cohen to Media Lab colleagues, Cohen reiterated that any contribution from Epstein to the lab “needs to be anonymous.”

Emails also showed Ito had “consulted closely with Epstein” and played an active role in seeking the donations. In one instance, Cohen contacted Ito for advice about a donor, where he wrote, “You or Jeffrey would know best.”

As detailed by The New Yorker, the Media Lab allegedly concealed the full amount of donations received from Epstein by marking his contributions as anonymous. The documents revealed that Epstein apparently served as a mediator of sorts between the lab and other wealthy donors, soliciting millions in donations, including from Gates. The financial connections between the lab and Epstein went “well beyond” what the lab and its director previously described in public statements.

Epstein was allegedly credited for securing at least $7.5 million in donations for the Media Lab, including $2 million from Gates, according to The New Yorker. The lab’s attempt to hide its contact with Epstein was so widely known that some of the staff from Ito’s office referred to Epstein as Voldemort, or “he who must not be named.”

Epstein was awaiting trial on sex trafficking charges in a Manhattan jail when he was found dead in his cell on Aug. 10. His death was ruled by the New York City Medical Examiner’s office as a suicide by hanging. However, during a court hearing on Aug. 27, Epstein’s lawyers told a judge they had doubts about whether the office’s conclusion was correct.