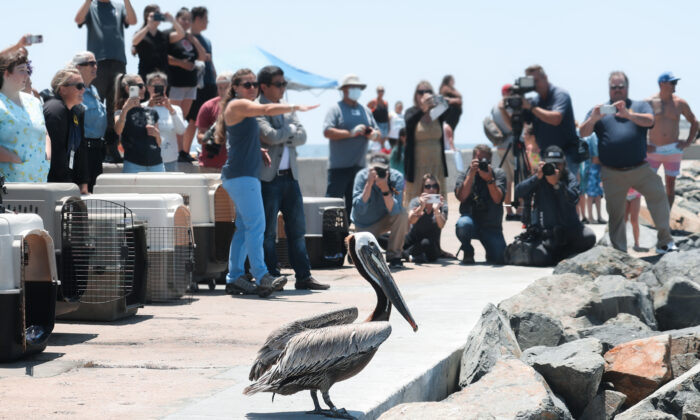 Supporters and bystanders are encouraged to watch quietly as pelicans are released after they had been nursed back to health, on a jetty at Corona Del Mar State Beach in Newport Beach, Calif., on June 17, 2022. (Julianne Foster/The Epoch Times)
Orange County Community

NEWPORT BEACH, Calif.—Twelve brown pelicans were released at noon on June 17 by the Wetlands and Wildlife Care Center (WWCC) off a jetty at Corona Del Mar State Beach after they had been carefully nursed back to health since a tragic event in May.

A mass-stranding event—also seen in 2001, 2010, 2012, and 2018—occurred in early May of 2022 after hundreds of sick and dying pelicans were seen along Southern California coastlines and inland lakes.

The birds suffered from common issues including low body temperature, dehydration, malnutrition, and many parasites. The birds received help from a variety of care centers who gave them fluids, medication, and plenty of fish to restore their health.

Jamie Heraver, founder of an educational foundation called Angel of the Animals was at the release hoping to see one of the pelicans she rescued flying away from the carriers. She told The Epoch Times she was walking in May for a morning Huntington Beach cleanup when she noticed a seemingly injured or sick brown pelican on the sand. With assistance from lifeguards, local animal control, and bystanders, she was able to get the bird to the security of the WWCC.

After watching ten pelicans glide quickly from their enclosures and another two hesitantly take flight, Heraver said the event “brought a tear to [her] eyes.” Seeing the small crowd together to celebrate the success and see all their rescue efforts culminate into this release was “really beautiful” for her.

The release was officially dedicated to the center’s former co-founder, Greg Hickman, who recently died unexpectedly due to a heart attack. Greg Hickman was very influential in his community to start the center and raise awareness for wildlife needs.

The WWCC began receiving birds on May 13 from eight surrounding animal control agencies, some arriving with oil on their bodies. These birds were in such low health, 20 died in the first two hours of admission. Finally, after support from the WWCC, 12 birds were finally ready to be reintroduced to the wild.

Debbie McGuire, the Co-Founder and Executive Director of WWCC stated in a press release they had been looking forward to seeing the pelicans return to their original ecosystem in good health. She also attributed the success of the pelican’s rehabilitation to their network of volunteers and generous donors.

The nature of the stranding event is still a mystery, according to a press release. Some pelicans that came in for care also had secondary issues involving skeletal abnormalities from fishing gear injuries.

The WWCC is a rehabilitation center that works to nurture wildlife and educate the public to be more aware of human impacts on the environment and wildlife. Community members can support their cause by donating to the center.