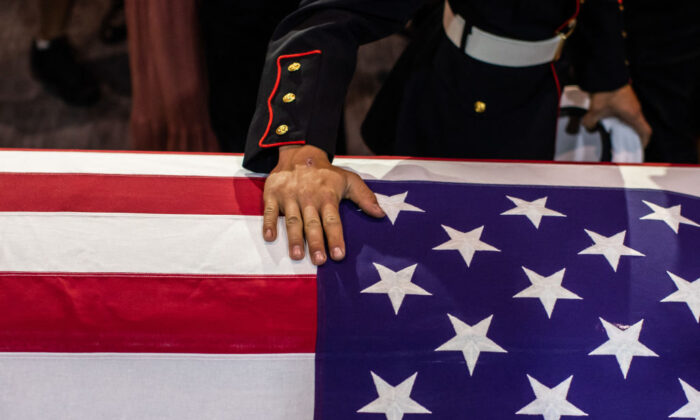 The brother of a Marine killed during last year’s chaotic withdrawal of U.S. troops and civilians from Afghanistan committed suicide last week, about a mile from a permanent memorial in Southern California dedicated to the fallen service members lost in the attack, authorities confirmed.

Dakota Halverson, 28, was still struggling with the death of his brother Lance Cpl. Kareem Nikoui and wanted to be with him again, according to his mother. Nikoui was one of 13 service members killed Aug. 26 during a suicide bombing at Kabul Airport.

“Dakota had been expressing some of the things that had been bothering him and one of those things was the loss of his brother Kareem and how he just wanted to be with him again,” his mother Shana Chappell wrote on social media Aug. 12. “He was still having a hard time believing he was actually gone.”

Halverson died at Pikes Peak Park in Norco on Aug. 9, according to the Riverside County Sheriff’s Department. The park is down the street from a permanent memorial created for his brother.

After losing both sons within a year, Chappell wrote she is “still in shock over this and honestly when the shock wears off [I] don’t know how [I] am gonna pull through this.”

Halverson used to sneak into the cemetery at night to sleep on his brother’s grave, his mother said.

The Fallen 13 Memorial Flower Garden was built by volunteers and opened last September to honor the service members killed in the attack at Abbey Gate outside the Kabul airport. Eleven Marines, along with a sailor and soldier were killed in the attack, along with about 170 people waiting to enter the gates to be evacuated. ISIS claimed responsibility for the bombing.

The family is asking for donations to pay for Halverson’s burial through a GoFundMe page. He wanted to be buried next to his brother, according to the page. As of Aug. 16, nearly $42,000 was raised.

“The older brother of one of the 13 KIA in Kabul recently killed himself at his little brother’s memorial,” Waltz wrote on Twitter last weekend. “Please pray for his family. There MUST be accountability for this continued carnage.”