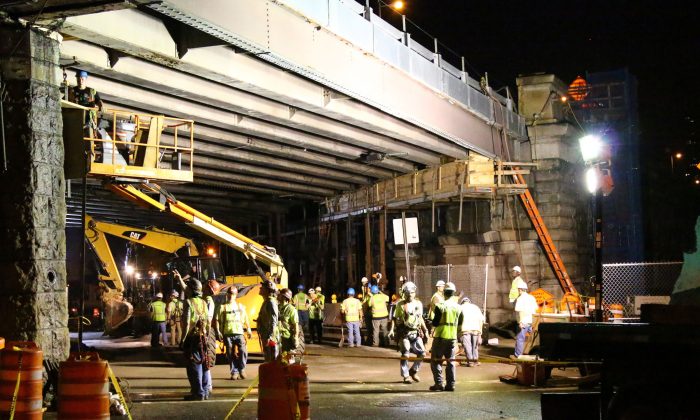 Construction workers performed emergency repair on a portion of the Washington and Prospect streets underpass of the Brooklyn Bridge, July 3. (Brendon Fallon/Epoch Times)
Crime and Incidents

The cause of the collapse is under investigation, according to city officials.

Five people who were near the wall when it fell onto the sidewalk and street sustained minor injuries, according to a representative for the city’s Office of Emergency Management (OEM). A small child tumbled to the ground while running with family members who were running for safety to avoid the crumbling granite stones.

The partial collapse occurred in the underpass at Prospect and Washington streets on the Brooklyn side. It is situated just next to a heavily traversed pedestrian walkway to the bridge.

The street and walkway were reopened early Thursday morning after at least 15 construction workers labored late into the night amid the glare of spotlights and summer rain. Both commissioners for the Department of Transportation (DOT) and OEM were on the scene.

The looming presence of heavy duty hauling vehicles and cranes could be seen, heard, and felt as workers moved huge blocks of rubble, worn timber, and concrete barriers to be taken off site. The barriers were positioned along the site’s perimeter to isolate them from late night passersby.

Pedestrians momentarily stunned by the bright white lights, stopped to watch as a small tear in the city’s aging iconic link between Manhattan and Brooklyn was stitched.

“People always try to get through,” said one of two NYPD officers who stood guard several yards from concrete barriers being heaved into the air.

The bridge, which took several years to complete, was one of the longest suspension bridges in the world when it opened in 1883. It is a national and city landmark. Over 120,000 vehicles, 4,000 pedestrians, and 3,100 bicyclists cross the Brooklyn Bridge daily, according to the DOT.

A full inspection of the facade is ongoing by the DOT in conjunction with its already ongoing inspection of the 788 city bridges under its purview. A current round of construction and repainting of the Brooklyn Bridge will finish sometime this year.