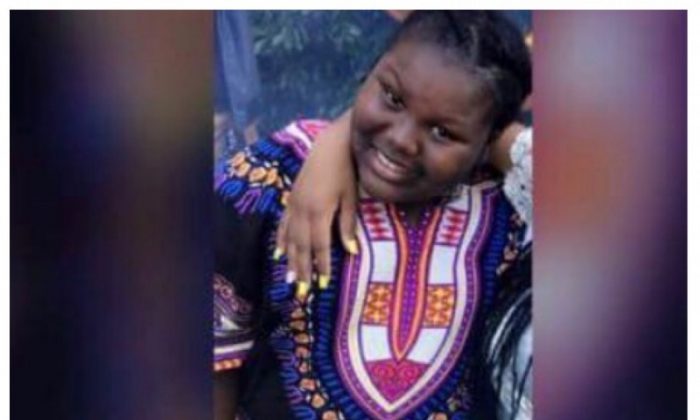 Jamoneisha Merritt suffered burns to 85 percent of her body after another young girl poured scalding water on her at a sleep over. (Family handout via GoFundMe)
New York

A sick prank that left an 11-year-old Bronx girl burned on over 85 percent of her body didn’t let her injuries keep her down for long.

Jamoneisha Merritt, who was doused with just-boiling water at a sleepover on Aug. 7, took to the street yesterday after her neighborhood put on a block party to give the young girl a huge welcome home celebration.

A supposed friend had poured scalding water on Merritt as part of a social media-inspired prank. She spent two weeks in the Harlem Hospital recovering, her body covered with blisters and burns.

But after the pain, confusion, and sadness, Merritt was ready to move on. It helped that so many friends, family, and well-wishers showed up.

Merritt told WPIX that she was feeling good.

“I just want to say thank you for coming and have a good time,” she said.

She told another local TV crew during a different interview that she was trying to stay positive.

Meanwhile, the 12-year-old girl who allegedly poured the boiling water on Merritt has been charged with felony assault.

And while Merritt has made a remarkable recovery, with the burns healing noticeably in the weeks since, there is still a long road ahead.

Merritt’s mother and aunt have started a GoFundMe fundraiser for Jamone that has raised $32,497 of the $100,000 goal in the last two weeks.

The money is for ongoing medical expenses, the project page explains.

The page, written by mother Ebony Merritt, says the family was “unprepared to deal with all of the costs that will be incurred for my daughter to make a full recovery. Besides initial hospital bills, there is also the possibility that multiple skin graphs [sic], plastic surgery & miscellaneous hospital visits will be needed. We also want to make sure that she attends counseling to make sure we heal her insides as well as her outside.”

“The emotional & physical pain my daughter is going through is something that no parent would want to bare [sic] witness to,” she wrote.

The “hot water challenge” has claimed multiple victims. The internet-driven phenomena pushes attackers to toss scalding water on unsuspecting victims as part of a prank.

In Merritt’s case, the attacker reportedly wished to cause the young girl pain. In other instances, executioners of the prank considered it would be painful but not dangerous.

Sometimes, participants were even willing to attempt it. One North Carolina boy suffered second- and third-degree burns after attempting the challenge with his stepbrother in July 2016.

In late July, an 8-year-old girl in Florida died from enduring respiratory problems several months after her same-age cousin dared her to drink boiling water through a straw.

Ki’ari Pope burned her mouth and throat, and received a tracheotomy.

A now-closed GoFundMe project raised $5,133 for her funeral expenses.