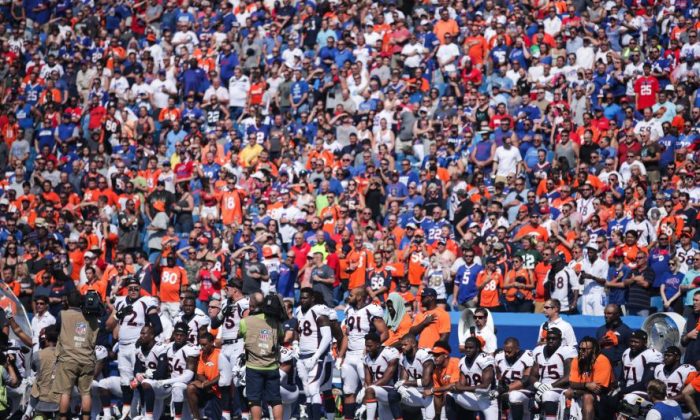 Denver Broncos linebacker Von Miller, a Super Bowl MVP counted among the most popular players in the NFL, took a knee on Sunday during the national anthem. Now he’s facing blowback.

The dealership later said that “sometimes we feel we best represent ourselves.”

“We support Von and his first amendment rights. We know Von, and he’s a good person. He donated a police car to his hometown police department. All that notwithstanding, when we bring in celebrities to represent us, we run the risk of being misrepresented,” the dealership stated. It added: “We, like millions of Americans are concerned and will respond consistently with our values as a proud American company founded by a war hero (Phil Long).”

Speaking with USA Today, Miller confirmed that his contract with Phil Long Ford was up. “I’m good,” he said, without elaborating.

Miller and a number other NFL players knelt during the anthem before the Broncos played the Buffalo Bills Sunday. CBS Denver reported that 32 Broncos—more than half the team’s 63-man roster—took knees.

President Donald Trump over the weekend said that athletes should be fired for not standing during the national anthem, writing on Twitter that “if a player wants the privilege of making millions of dollars in the NFL, or other leagues, he or she should not be allowed to disrespect our Great American Flag (or Country) and should stand for the National Anthem.”

As the Denver Post reported, a number of the Broncos fans “stampeded social media and the Broncos’ phone lines to register disgust” with the protest.

“The Broncos will see a 30 percent decline in sales and support over the next several weeks, due to their unpatriotic and embarrassing antics Sunday in Buffalo,” said reader Randy Stewart in a message to the Denver Post’s tip line.

On Monday, Broncos officials said that no season-ticket holders have asked for a refund.

“We have received calls and emails from fans expressing many different viewpoints on the events of the last few days around the country,” said Patrick Smyth, the Broncos executive vice president. “We appreciate the feedback and have responded to as many of them as possible.”