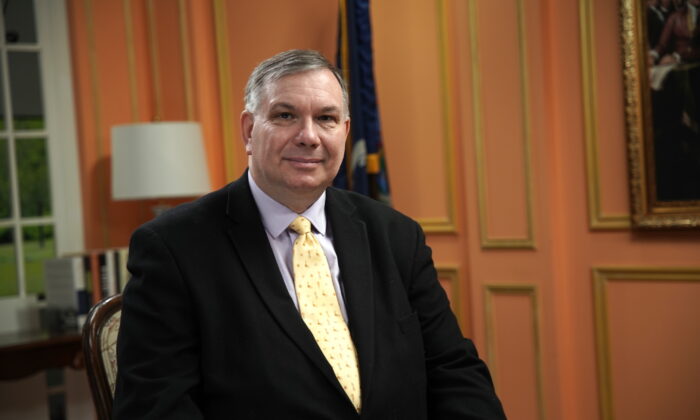 John Fund, co-author of "Our Broken Elections: How the Left Changed the Way You Vote," in New York on Nov. 15, 2021. (Blake Wu/The Epoch Times)
US Features

‘Broken Elections’: How Prevalent Is Election Fraud in the US, and What Can Be Done About It?

“The Pew Research Center,” says John Fund, “estimates that between 15 and 20 percent of voter registrations right now are invalid, outdated, or inactive.”

In a recent episode on “American Thought Leaders,” host Jan Jekielek discussed America’s voter ID laws and the integrity of our elections with John Fund, co-author with Hans von Spakovsky of “Our Broken Elections: How the Left Changed the Way You Vote,” which examines the vulnerabilities of our election process and offers recommendations to fix those problems.

Jan Jekielek: I’ve been enjoying your new book, “Our Broken Elections.” It seems there’s this ubiquitous narrative that voter fraud isn’t a thing. How does this all work?

John Fund: Until about a decade ago, this issue was discussed in a bipartisan way. Many newspapers in America have won Pulitzer Prizes for uncovering voter fraud cases: the Chicago Tribune, the Miami Herald, and the Cleveland Plain Dealer as recently as the early 2000s.

In 2002, Congress came together, a Democratic Senate and a Republican House. This was after the Bush v. Gore fiasco in Florida, and they passed the first federal election law. That bill gave states and local governments money to improve their voting machines. It also toughened up requirements that states clean up their voter rolls.

And then in 2008, the Supreme Court weighed in on a 6–3 decision on the constitutionality of voter ID laws.

In 2016, a majority of people who voted for Hillary Clinton believed she won the election, either by interference from the Russians or by manipulation behind the scenes. That also undermined confidence in the elections.

Then you had the Trump–Biden election, which was full of controversy. Now, my book isn’t about taking sides or determining the final outcome of the 2020 election. But it absolutely nails down documented problems in the 2020 election.

Mr. Jekielek: Let’s go back to this issue in the Nov. 3 elections here in New York.

Mr. Fund: There were three constitutional amendments on the ballot in New York state, which is one of the most liberal states in the country.

The second would’ve set up a same-day voter registration system. People could go to the polls and give an address, register to vote on the spot, and vote immediately, which is an open invitation to fraud and abuse.

The third amendment would’ve dismantled whatever remains of the election protections, which is that if you send in a mail-in ballot, it’s a valid ballot and can be cast legitimately.

All these amendments lost overwhelmingly in New York state, one of the most liberal in the country. The average voter doesn’t buy into this consensus in the mainstream media that voter fraud isn’t an issue.

Mr. Jekielek: It’s hard to believe that this might even be a contentious issue.

Mr. Fund: The Democratic Party believes the health of a democracy should be measured by how many people vote.

At the same time, however, Americans shouldn’t have votes canceled out by someone who shouldn’t be voting or someone who’s moved out of state. Someone who’s dead. Look, I believe in honoring our ancestors, but I don’t believe in representation without respiration.

Mr. Fund: Well, if you allow dead people to vote, isn’t that what you’re giving them? Representation without respiration?

Chicago used to have people who would go out to the graveyards, take names down, and then enter them into the polling book. It’s a long, dishonorable tradition.

Many people have said to me: “I tried to vote in the last election and was told someone had already voted for me. I had to fill out a provisional ballot, but my ballot wouldn’t be counted, ultimately, because someone had voted. They had my name and address, and without ID they were able to vote.”

Mr. Jekielek: There’s not a lot of times I’m speechless when doing this show, but this is one of them.

Mr. Fund: It’s a difficult crime to prove. Prosecutors are loath to pursue them because a lot of prosecutors want to climb the political ladder, which means they’re going to run for office. And if you prosecute a voter fraud case, you’re going to anger partisans in the other party.

And in certain neighborhoods and cities, you’re automatically going to be accused of racism or voter suppression. Who wants that on their political record, even if the charge is bogus?

Minorities support voter ID and election integrity laws as much or more in many cases than whites. They think it’s a serious problem. Why would that be? It’s because many minority voters live in urban areas or in impoverished rural areas where political machines dominate.

COVID allowed the left to take all the ideas they had for dismantling election integrity and put them into practice under the cover of COVID health rules.

In some places, the mail-in vote exceeded the voting at the polls. Now, I’m in favor of absentee mail-in voting, but it shouldn’t become the norm. It should be the exception. We should vote under the supervision of election officials at a polling place.

Mr. Jekielek: I can’t help but doubt more and more the validity of elections.

Mr. Fund: In modern times, the vast majority of elections have been conducted freely, fairly, and properly. The problems Hans and I outline in the book are mostly isolated or limited to places where long-term political machines want to stay in power.

In the 2020 election, what was concerning was the creative ways that people had of tilting the balance in some of those critical swing states that everyone knew the election for president would be decided on.

Mr. Jekielek: So, would you say this dramatic increase in absentee ballots is the biggest issue?

Mr. Fund: It’s the biggest potential issue because the opportunity for mistakes, manipulation, and even outright fraud exists.

Mr. Jekielek: Let’s talk about how to create a system that’s more reliable and effective at making sure every vote is a real one.

The Pew Research Center estimates that between 15 and 20 percent of voter registrations right now are invalid, outdated, or inactive. They represent people who aren’t eligible to vote, who no longer exist, or who are otherwise out of the system.

Mr. Jekielek: And so, ultimately, what’s going to bring back faith in the system?

Mr. Fund: Doing what we have written in our book. We also need the media to devote resources to telling the full story.

Sunlight is the best disinfectant, but much of the mainstream media has bought into a single narrative on this. There are exceptions like your network, but most of the time, people just repeat the same old tired charges of racism and voter suppression. when that’s not the real story anymore. That may have been the case in the 1960s, and we fought to overcome that. The story is different now. It has different villains and different sets of facts.