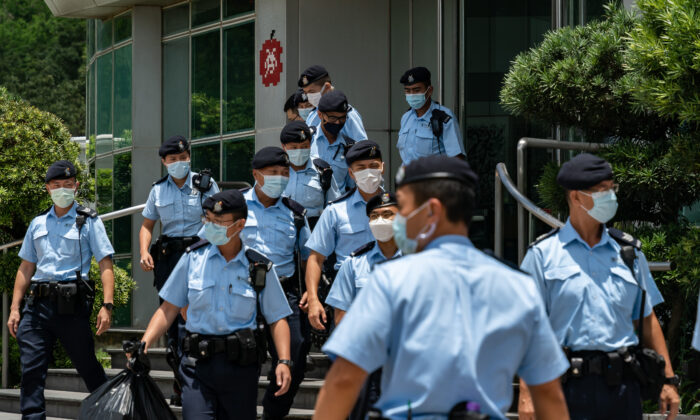 Police carry evidence they sized from the headquarters of the Apple Daily newspaper and its publisher Next Digital Ltd. on June 17, 2021 in Hong Kong, China. (Anthony Kwan/Getty Images)
Hong Kong

Twenty-one governments belonging to the Media Freedom Coalition have issued a joint statement expressing their “deep concern” over Hong Kong authorities’ and the Chinese Community Party’s (CCP) ongoing censorship and suppression of the media of Hong Kong.

While much of the world focuses its attention on the Winter Olympics in Beijing, Hong Kong reels from an aggressive and escalating clampdown on local media. In December, police raided the offices of the independent website Stand News, arresting seven staff and forcing the site to shut down. Then, in January, the independent website Citizen News announced it would fold out of concerns for the wellbeing of its staff in the frayed environment.

An immediate precedent for both these developments can be found in the raid on the offices of pro-democracy newspaper Apple Daily in June, and the confiscation of notebooks, computers, disks, and files belonging to the news staff. Authorities also arrested founder Jimmy Lai and charged him with crimes under the harsh national security law imposed on Hong Kong in June 2020, soon following up with additional charges related to his work on what authorities described as a seditious journal.

And, in October, Hong Kong’s legislature, ostensibly in the name of national security, enacted a new film censorship law widely predicted to make it more difficult for local moviemakers to bring their visions to the world. Experts said the law was likely to have a greater impact on smaller independent filmmakers centered in Hong Kong, given that the bigger names already active in both mainland China and Hong Kong, like Tsui Hark, who maintains an office in China, have already had to grapple with CCP censorship there.

The staff and operations of the Hong Kong edition of this publication have also come under attack. In the early hours of April 12, 2021, four intruders entered the Hong Kong printing facilities of the Epoch Times and proceeded to damage printing equipment and computers. The incident was similar to an arson attack on the same facility in November 2019, which also involved four intruders. On May 11, 2021, an assailant wielding an aluminum bat came up to Epoch Times reporter Sarah Liang while she stood outside her residence and inflicted more than ten blows, inflicting severe bruises and causing Liang to be hospitalized, before fleeing.

The Media Freedom Coalition’s Feb. 8 statement cites the recent raids and clampdowns on local news sources in its denunciation of the erosion of free speech in Hong Kong, charging that the campaign “has eroded the protected rights and freedoms set out in the Basic Law and undermines China’s obligations under the Sino-British Joint Declaration.” The joint declaration is an international treaty governing Hong Kong’s handover from British to Chinese rule in 1997, under which Beijing pledged to allow the city freedoms and autonomy not enjoyed in the mainland for a period of 50 years.

Besides wiping out nearly all independent media outlets in the territory, the statement charges, the authorities have done serious harm to Hong Kong’s international reputation.

“A stable and prosperous Hong Kong in which human rights and fundamental freedoms are protected should be in everybody’s interest. We urge Hong Kong and mainland Chinese authorities to freedom of the press and freedom of speech in Hong Kong, in line with the Basic Law and China’s obligations under the Sino-British joint declaration,” the statement continues.