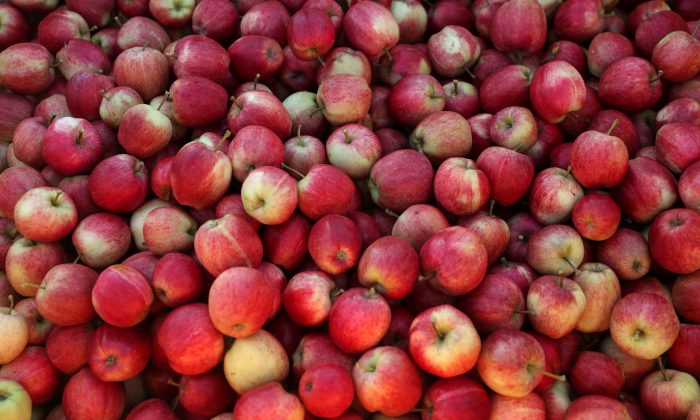 LONDON—Britons could face shortages of fresh food, price rises, and less variety if the country leaves the European Union next month without agreeing on trade terms, food industry officials say.

With no deal in sight as Britain’s March 29 exit date approaches, supermarkets are stockpiling, working on alternative supplies and testing new routes to cope with an expected logjam at the borders but say they face insurmountable barriers.

“You can’t stockpile fresh produce, you haven’t got any space and it wouldn’t be fresh,” said Tim Steiner, head of online supermarket pioneer Ocado.

The warnings, including talk of whether rationing would be needed, are part of a chorus of concern from businesses who say they are weighed down by uncertainty in what was once considered a bastion of Western economic and political stability.

The last time Britain’s food supplies were seriously hit was when fuel protests prompted panic buying almost two decades ago, forcing some supermarkets to ration milk and bread and others to warn that stocks would run out in days.

Executives within the food chain said Britain is better prepared than 2000, but disruption may be more widespread and last longer than the few days it took before the fuel dispute was settled.

James Bielby, head of the Federation of Wholesale Distributors, said its members’ retail and catering customers were asking for between one and eight extra weeks’ supply. But storage is limited in an industry that operates on a “just in time basis” to maximize the shelf life of goods.

Intense competition and slim margins in the British supermarket sector have also made contingency planning more complicated. James Walton, chief economist at IGD, which works with the industry to improve supply chains, said storage had been reduced over many decades to hold down working capital.

What remains is now full. “So surplus space within stores is being used and containers are in carparks,” he said.

Mike Coupe, the boss of Britain’s second biggest supermarket Sainsbury’s, said supplies would not last long. “We don’t have the capacity and neither does the country to stockpile more than probably a few days’ worth,” he said in January, echoing the supermarket’s warning to then-Prime Minister Tony Blair in 2000 during the fuel crisis.

Britain imports around half of its food, and while some is flown in via air freight, most enters on trucks through Dover, Britain’s main gateway to Europe.

At peak times, 130 trucks a day are required to drive through Dover bringing citrus fruit alone, according to the British Retail Consortium. In March, inclement British weather means 90 percent of lettuce comes from the EU.

If it leaves without a trade deal, Britain will move on to World Trade Organization rules that require tariffs to be paid, goods to be checked and paperwork to be completed, demands that do not currently exist for goods coming from within the EU.

The English Apples & Pears group said British farms have been asked to provide more apples until the end of April by retailers who usually source more from the southern hemisphere from March.

Other substitutions are more difficult.

“People just say we’ll eat more British produce but … would people be happy to start eating tonnes of British leeks? I’m not sure,” said an executive at one of Britain’s four major supermarket groups, who declined to be named because of the possible business impact.

“We have to plan for the worst,” he said, before adding that he hoped Britain would delay its departure date from the EU.

Consultants, suppliers, company sources, and trade groups said importers were looking at securing new routes into Britain in case customs checks clog up Dover, but no other port offers that frequency of ferry sailings or trains through the tunnel.

They would also have to compete with companies importing drugs, car parts, and chemicals that are also looking to alternative ports on the south and east coast of Britain.

The Spanish wine federation said they had advised members to avoid shipping goods to Britain around the end of March.

Supermarkets could fly in more goods—as they did to bring in lettuce from the United States in 2018 when bad weather hit European supplies—but it is expensive and capacity is limited.

William Bain, a policy adviser at the British Retail Consortium, said clients and suppliers were having talks now to discuss how costs and risks would be shared if stock is delayed.

Elsewhere in the food chain, suppliers of TV dinners are considering changing ingredients to remove those with the shortest shelf life, according to the Fresh Produce Consortium.

All of these changes could lead to higher prices however, with changes to recipes requiring changes to labeling.

Dominic Goudie, in charge of exports, trade and supply chains at the Food and Drink Federation, told Reuters prices were likely to rise, regardless of the outcome.

“We know from our members that they are investing staggering sums into getting ready for the worst possible no-deal scenario,” he said. “The sums are so large that manufacturers need to pass it on to their customers, the retailers.”

Another senior executive at a major British food retailer told Reuters they had seen no signs yet of Britons buying so-called ‘bunker lines’—toilet paper, bottled water, and canned food. But it could happen before March 29.

“If you’ve got a limited amount of food, you want to distribute it fairly across the country,” he told Reuters. “So you almost get to this ridiculous notion of rationing.”

Some of Britain’s deeply divided politicians who are seeking a complete break with the EU say the economy would soon recover from any short-term hit as it adapts to new trading routes after Brexit.

They argue that talk of food shortages and rationing is scaremongering driven by the government to rally support for Prime Minister Theresa May’s proposed Brexit deal, agreed with the EU but showing little sign of getting sufficient support from her own parliament.

Environment minister Michael Gove, who backed Brexit, has said leaving without a deal could lead to higher prices, but that the government has chartered extra ferries to maintain the movement of goods. “We are meeting weekly with the food industry to support their preparations for leaving the EU,” a spokesman said.

Tesco chairman John Allan said the retailer, Britain’s biggest with 3,400 stores and almost 28 percent of the market, was stockpiling goods with a long shelf life but that its options for fresh produce was more limited.

“So provided we’re all happy to live on Spam and canned peaches all will be well,” he added.

By James Davey and Kate Holton