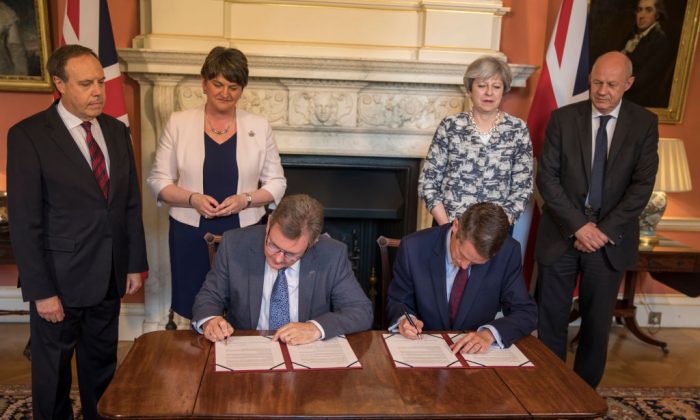 British Prime Minister Theresa May Makes a Deal With DUP

British Prime Minister Theresa May made a deal Monday, June 26, that could keep her minority government alive while it pushes ahead with Brexit negotiations.

But the deal could be seen to contradict London’s neutral role in Northern Ireland and may complicate a political showdown that has shut down the province’s Legislature.

Under the deal, May’s government will allot Northern Ireland an extra 1 billion pounds ($1.3 billion) in funding for the support of the Protestant-backed Democratic Unionist Party (DUP) in the federal Legislature, where it holds 10 seats.

Those 10 seats give May a total of 327 votes, a slim majority of the House of Commons 650 seats and just enough to push through her legislative agenda.

But relying on federal votes from the DUP raises questions of how May’s government will maintain neutrality in Northern Ireland, where DUP holds 28 seats in the Northern Ireland Assembly.

Without a power sharing agreement from both sides, the government is dissolved. If the two parties can’t form an agreement, Westminster takes responsibility for running the country entirely.

That’s the prospect now facing Northern Ireland, a scenario that could deepen divides in the country where the second largest party, the Irish Catholic-backed Sinn Fein, is working to separate Northern Ireland from the U.K. and unite with Ireland as an independent nation.

Sinn Fein holds 27 seats in the Northern Ireland Assembly where it has been unwilling to work with Arlene Foster, leader of the DUP at both the federal and provincial (country) level.

Foster became a polarizing figure in Northern Ireland due to a fraud and abuse of a green energy program she set up. Conflict over that program led Sinn Fein to dissolve the government by withdrawing from the power-sharing agreement.

That was in January. The two sides have held faltering talks in the months since to resolve the situation. If it cannot be resolved, the default is London taking over.

Sinn Fein also elects members of Parliament to the federal Legislature, but they don’t take the oath to the queen and don’t sit in Parliament, meaning their seven votes remain inactive.

Theoretically, this gives May an added cushion in any vote, but given the deal with the DUP, some commentators in the U.K. are speculating what could happen if she loses two MPs and Sinn Fein decides to get involved in the votes at Westminster.

May and Foster presided at the signing of a deal at Downing Street. They smiled and joked as negotiators from both sides, the DUP’s Jeffrey Donaldson and Conservative Gavin Williamson signed the deal that will run for the life of the current Parliament due to end in 2022.

In exchange for extra spending in Northern Ireland, the DUP agreed to support May on her budget, Brexit laws, national security, and her overall legislative plan.

“Today we have reached an agreement with the Conservative Party on support for government in Parliament,” DUP leader Arlene Foster said in Downing Street. “This agreement will operate to deliver a stable government in the United Kingdom’s national interest at this vital time.”

Some senior Conservatives said the DUP deal jeopardizes the 1998 peace settlement in Northern Ireland, known as the Good Friday Agreement.

As part of the agreement, Britain is to remain relatively neutral and devolve powers to the Northern Ireland Assembly, a process that has halted since the January breakdown.