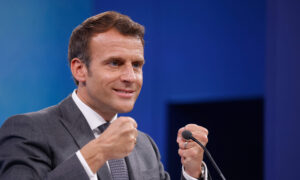 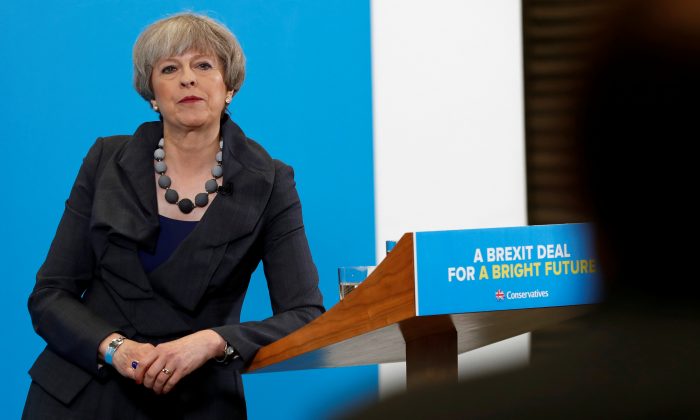 Britain's Prime Minister Theresa May at an election campaign event at C.J. Leonard and Sons in Guisborough on June 1, 2017. (REUTERS/Stefan Wermuth)
UK

LONDON—British Prime Minister Theresa May’s gamble on a snap election was under question on Thursday after the latest opinion polls showed her Conservative Party’s lead was dwindling just a week before voting begins.

Failure to win the June 8 election with a large majority would weaken May just as formal Brexit talks are due to begin while the loss of her majority in parliament would pitch British politics into turmoil.

In the strongest signal yet that the election is much closer than previously thought, May’s lead has collapsed from 24 points since she surprised both rivals and financial markets on April 18 by calling the election.

A YouGov survey showed May’s lead at a fresh low of 3 percentage points with the opposition Labour party polling 39 percent against the Conservatives’ 42 percent.

There was slightly better news for May from a Panelbase poll which put her party 8 points ahead of Labour, but that still meant the Conservatives’ advantage had almost halved in a week.

Meanwhile a separate YouGov model based on different data estimated the Conservatives would win 317 seats, nine short of an overall majority of 326 seats.

In a hectic campaign which was suspended after a suicide bombing last week, pollsters, who universally got it wrong before the last vote in 2015, have offered a vast range for the result of the election: From May losing her majority to a landslide victory for her Conservatives of more than 100 seats.

“From the pollsters’ point of view this is an experimental election. We all got it wrong in 2015 and we are all trying different methods to get it right this year,” said Anthony Wells, a research director at YouGov.

Betting that she would win a strong majority, May called the snap election to strengthen her position at home as she embarked on complicated Brexit negotiations with 27 other members of the European Union.

But if she fails to beat the 12-seat majority her predecessor David Cameron won in 2015, her electoral gamble will have failed and her authority will be seriously undermined.

If May failed to win an overall majority, she would be forced to strike a deal with another party to continue governing either as a coalition or a minority government.

That would have uncertain consequences for Britain’s $2.5 trillion economy, and future government policy on everything from government spending and corporate taxation to bond issuance.

Sterling weakened against the dollar late Wednesday after the YouGov poll but was trading at $1.2857 on Thursday, about 3 cents above where it was trading at the start of the campaign. The FTSE posted its best month of the year, helped by a weaker pound.

YouGov said May was still the most favored choice for prime minister, though her 43 percent rating is the lowest it has ever been. Labour leader Jeremy Corbyn is on his highest ever rating of 30 percent.

Corbyn, a 68-year-old peace campaigner, has been pulling in big crowds at rallies across the country despite warnings from opponents in his own party that he is leading Labour to the worst defeat in its history.

May, who won the top job in the political chaos following the shock June 23 Brexit vote, used a speech on Thursday in northern England to pitch her vision of Brexit.

“Set free from the shackles of EU control, we will be a great, global trading nation once again bringing new jobs and new opportunities for ordinary working families here at home,” May said. “You can only deliver Brexit if you believe in Brexit.”

May backed the “remain” campaign in the runup to last year’s referendum on EU membership, though she made few public appearances, but has repeatedly sought to present herself as the only party leader able to make a success of Brexit despite giving few details of how she will handle the negotiations.

The Financial Times came out publicly for May, saying she was the safer bet, though The Sun newspaper, Britain’s top selling paper, cautioned that May’s campaign was far too defensive.

“Corbyn is selling a wonderland,” The Sun said. “And even if his promises are practically impossible and economically catastrophic, set against the Tories’ unnecessarily defensive campaign it’s small wonder he appears to be picking up support.”

May was taunted by other party leaders for not attending a televised debate with them. Instead, May sent her interior minister, Amber Rudd, who dismissed the leaders as members of a “coalition of chaos”.

The Financial Times said in an editorial that an increased Conservative majority could lead to more hardline Eurosceptics in May’s party.

“Her resolve on Brexit is not in doubt; but her ability to deliver the best deal for Britain in terms of the closest possible relationship with the EU is worryingly unclear,” it said.