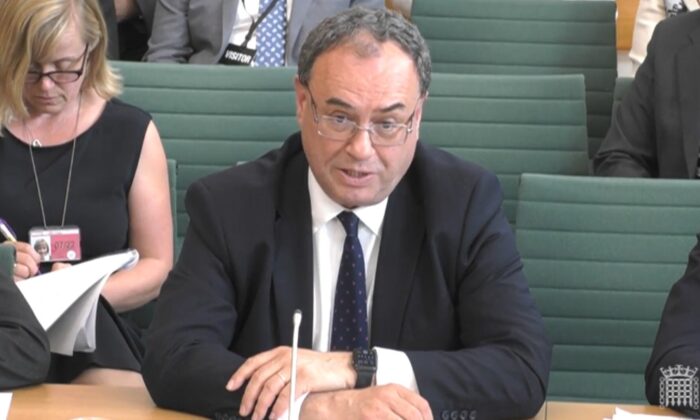 Andrew Bailey, governor of the Bank of England, gives evidence to the Treasury Select Committee at the House of Commons, London, on May 16, 2022. (PA Media)
UK

The British pound dropped on June 15 to its lowest level against the U.S. dollar since March 2020. The plunge reflects concern about the widening gulf between interest rate policies at the Bank of England (BOE) and the Federal Reserve.

The European Central Bank also made a surprising move, with the announcement that it will deliver its first interest rate hike since 2011 next month.

The pound dipped by 0.6 percent against the dollar, to $1.2064, with year-to-date losses at almost 11 percent on foreign exchange markets, as traders reacted to poor figures from the jobs market and the possibility of another referendum on Scottish independence.

The pound meanwhile, fell more than 1 percent against the euro to about 86.81 pence, its lowest level since May 2021.

The British currency is under pressure, as the dollar rose to a two-decade peak, with higher than expected U.S. inflation rates in May fueling anticipation of a more aggressive rate hike by the Fed.

The Fed raised interest rates by 75 basis points on June 15, the largest rate hike since 1994.

The U.S. Bureau of Labor Statistics released a June 10 report that showed the annual rate of U.S. inflation rising to 8.6 percent, led by food, housing, and energy costs, the highest in 41 years.

In the UK, there have been concerns that the BOE will take a more cautious approach to raising rates, after June 14 data from the UK’s Office for National Statistics showed the British economy contracting by 0.3 percent in April.

A new report showed the UK unemployment rate unexpectedly rose to 3.8 percent in April, despite an apparently strong labor market, up from 3.7 percent in March. Economists had forecast a decline to 3.6 percent.

However, as in the United States, many British workers appeared to have dropped out of the labor market altogether.

Households in Britain dealt with an increase of 54 percent in energy bills and an increase in payroll taxes in April, with more recent data showing cutbacks in non-essential purchases.

The service sector expanded by 2.6 percent, bolstered by strong consumer spending in retail and personal services such as hairdressing.

The manufacturing sector dropped by 1 percent, due to price increases and supply shortages, while construction fell by 0.4 percent.

The UK inflation rate for May hit a 40-year high of 9 percent, while the BOE policy rate stands at 1 percent, the highest since 2009.

The BOE is expected to announce a decision on interest rates at its fifth consecutive meeting this year, on June 16. The bank faces pressure to increase interest rates by 0.5 percent, a more aggressive move than the widely expected 0.25 percent.

“The situation in the jobs market, alongside the £15 billion extra government stimulus, is probably enough to convince the committee to hike in June, August and September,” said James Smith, developed markets analyst at ING.

“That stimulus, which is targeted at those most affected by higher fuel bills, will lift GDP by perhaps a half a percentage point, with most of the impact in the second half of the year. That will help mitigate against the risk of a technical recession,” he said.

Other strategists believe it is unlikely that British bank officials will call for a 50 basis point hike, due to concerns over weak consumer confidence.

“With inflation remaining stubbornly high and a red-hot labor market showing no signs of easing, it won’t be enough to prevent the Bank of England from hiking rates,” according to Ana Luis Andrade, an analyst at Bloomberg Economics.

“Given the risks to the economy, a 50 basis point move this week looks highly unlikely— we expect a 25-bp hike, with rates climbing to 2 percent by November,” she concluded.

Meanwhile, the pound is also dealing with the potential impact of the renegotiation of the agreement between Whitehall and the European Union, over the border with Northern Ireland.