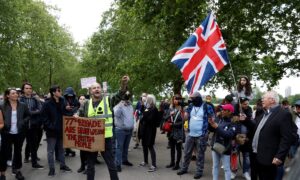 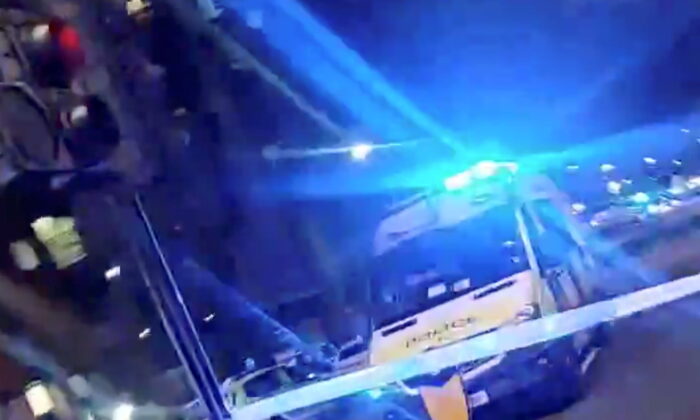 A police car is seen after an incident at Edmonton Police station in London, Britain November 11, 2020, (Credit: this still image obtained from a social media video. Twitter @chechiok/via REUTERS)
UK

LONDON—British police said they had detained a man after a car was crashed into a north London police station on Wednesday.

The Metropolitan Police said the incident took place just before 7 p.m. at Edmonton Police station which was then evacuated. Officers were on the scene and there were no reports of any injuries.

Unverified footage on social media showed a crashed car at the front of the station and a man pouring flammable liquid and then lighting a fire on the street outside before being grappled onto the ground by officers.

“The vehicle remains at the scene. Specialist officers are in attendance while it is examined,” the police said in a statement shortly after the incident. “The police station has been evacuated and a large police cordon is in place.”

Kate Osamor, the local member of parliament, said on Twitter: “A major incident has been declared at Edmonton Green police station. Please stay safe if you’re in the area.”

The wife of a witness at the scene told The Guardian her husband saw a car crash through the exterior glass entrance of the police station. A man in the car the tried to enter the police station only to be stopped by a second barrier.

“He was insisting on trying to get inside, but the glass door wouldn’t break any more so he couldn’t get any closer,” she said. “Then he casually got out of the car with a tank of petrol. He poured it down from the car into the middle of the road and then he just set it on fire.”

There were no further details from the police as to the nature of the incident.

Earlier this month, the terrorism threat level in Britain was raised to “severe,” meaning an attack is seen as highly likely, after recent incidents in France and Austria, although the government said there was no specific threat.

By Andrew MacAskill and Michael Holden