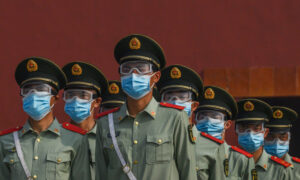 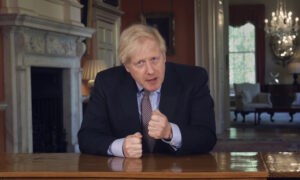 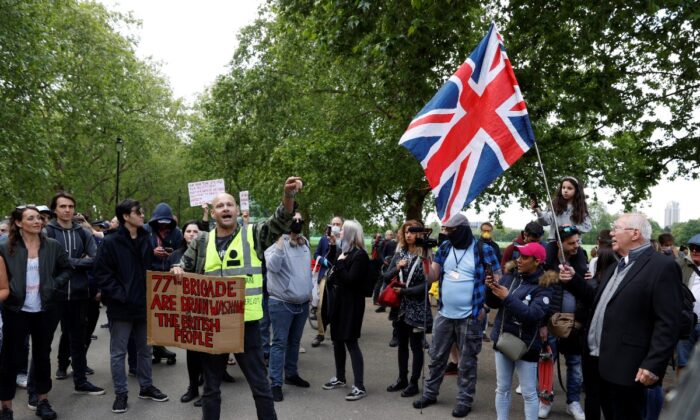 People hold up banners and a union jack flag in protest against lockdown and vaccination in Hyde Park, following the outbreak of COVID-19, London, Britain, on May 16, 2020. (John Sibley/Reuters)
UK

LONDON—London police arrested 19 people on May 16 for deliberately breaking social distancing guidelines in protest against the rules, on the first weekend since Prime Minister Boris Johnson announced a slight loosening of England’s lockdown.

The Metropolitan Police said that a group in central London’s Hyde Park had been protesting about the government’s response to the COVID-19 pandemic, and had failed to comply with repeated requests to disperse.

“It was disappointing that a relatively small group in Hyde Park came together to protest the regulations in clear breach of the guidance, putting themselves and others at risk of infection,” Laurence Taylor, Deputy Assistant Commissioner at the Metropolitan Police, said in a statement.

“Officers once again, took a measured approach and tried to engage the group to disperse. They clearly had no intention of doing so, and so it did result in 19 people being arrested, and a further ten being issued with a fixed penalty notice.”

Last Sunday, Johnson outlined plans to ease the lockdown, and people in England are now allowed to meet with another person from a different household in a park. However social distancing must be maintained under the rules, and gatherings of large groups are not allowed.

The protesters represented a minority of those the police encountered on Saturday, Taylor said.

“It was pleasing to see that people were largely compliant with the government guidance. Where they weren’t, and after we engaged with them, they quickly were,” he said.