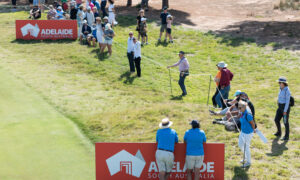 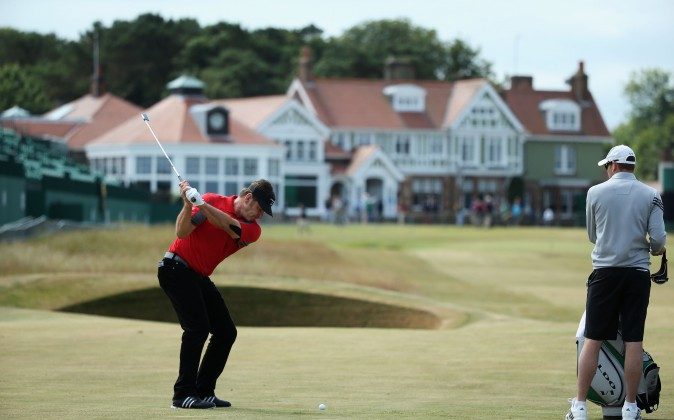 Sir Nick Faldo of England hits a shot on the 18th hole ahead of the 142nd Open Championship at Muirfield on July 15, 2013, in Gullane, Scotland. (Andy Lyons/Getty Images)
Golf

Muirfield, the ‘Home of the Honourable Company of Edinburgh Golfers,’ has been dropped as host of this year’s British Open.

The Scottish club announced the results of a vote on May 18 that women will not be allowed to play in the event.

Just several hours later, the Royal and Ancient (R&A), which runs the British Open, said it wouldn’t hold the event at “a venue that does not admit women as members.”

R&A statement on the announcement at Muirfield: Going forward we will not stage @TheOpen at a venue that does not admit women as members.

Muirfield required two thirds (432) of its 648 eligible voters to admit women as members—but after a 2-year, “comprehensive” voting process, the passing votes fell short, according to BBC.

On its website, Muirfield says it is “a renowned host to major championships amateur and professional, international and national, men and ladies—all of which have produced worthy champions of whom more later. Eleven Amateur Championships have been played over the course and 16 Open Championships.”

The last Open was played at Muirfiled in 2013 (men only, of course). Phil Mickelson won the famous ‘Claret Jug.’

“The club, therefore, will retain its men-only membership policy. The Honorary Club is a members club and the members decide the rules of the club, including its membership policy. Women will continue to be welcome at Muirfield on the course and in the clubhouse as guests and visitors, as they have been for many years,” Fairweather said.

Backlash became evident on social media, as followers of the Open and golf fans alike expressed their disdain over the decision:

Why would I want to join #Muirfield when my tiny lady brain is not capable of learning the rules of golf anyways. I’m off shopping.

Well done #Muirfield. Hang your heads in shame you archaic, shambolic excuse for a sporting establishment. ⛳

Even Scotland’s First Minister voiced her opinion on the situation:

Scotland has women leaders in every walk of life. It is 2016. This is simply indefensible. https://t.co/qrULGuFG8v

R&A St. Andrews opened its membership to women back in 2014—the first time in 260 years—and R&A St. George lifted its ban on women last year, according to BBC.