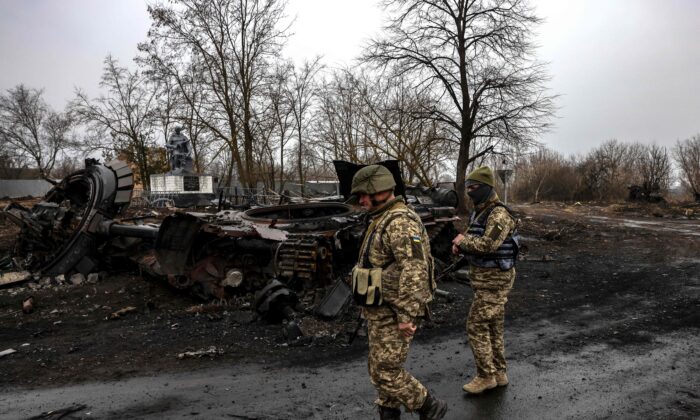 Ukrainian soldiers patrol next to a destroyed Russian tank in the village of Lukianivka near Kyiv, on March 30, 2022. (Ronaldo Schemidt/AFP via Getty Images)
UK

A British national has been killed in Ukraine and another is missing, the UK Foreign Office has confirmed.

In a statement on April 28, the Foreign Office said: “We can confirm that a British national has been killed in Ukraine and are supporting their family.”

On the missing person, the spokesperson said: “We are aware of a British national who is missing in Ukraine and are supporting their family. We are urgently seeking further information.”

UK media, including the BBC and Sky, have named the dead man as Scott Sibley, a British military veteran who is believed to have been fighting in support of Ukrainian forces against the Russian invasion.

A fundraising page set up in Sibley’s name paid tribute to his “contagious laugh and ability to cheer us up.”

Tributes were also left on the Facebook page of the Logistic Support Squadron, where a picture was posted alongside the comment: “This week the Sqn has lost a former serving soldier. A man that showed Commando spirit until the end. RIP. Scott Sibley.”

But she denied that Foreign Secretary Liz Truss caused confusion by saying in February she would support UK nationals who chose to fight for Ukraine.

“The government was clear that the travel advice was: do not go to Ukraine. It was clear and it was reiterated many times,” she said.

A number of British nationals, including both military veterans and people without combat experience, are thought to have travelled to Ukraine.

Two Britons—Shaun Pinner and Aiden Aslin—were both captured earlier this month while fighting with the Ukrainian armed forces against Russia.

They have been paraded on Russian state TV, which showed them asking Prime Minister Boris Johnson to help bring them home.

A small number of serving British personnel are believed to have gone absent without leave to join the resistance in Ukraine.

Defence Secretary Ben Wallace said last month that serving British soldiers who leave their posts to fight in Ukraine will be prosecuted for breaking the law.

Veterans minister Leo Docherty has previously written to armed forces charities to encourage those tempted to travel to the war zone to turn their efforts to helping the Ukrainian people from the UK.

Meanwhile, the Foreign Office said on April 29 that it is urgently seeking more information following reports of British nationals being detained in Ukraine.

UK non-profit organisation Presidium Network have said that two civilians working as humanitarian aid volunteers were captured by Russian forces on April 25 at a checkpoint south of the city of Zaporizhzhia in south-eastern Ukraine.

They were not working for the Presidium Network, which helps to get aid into Kyiv.