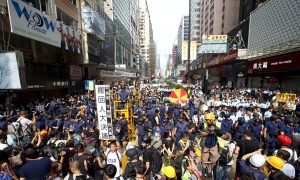 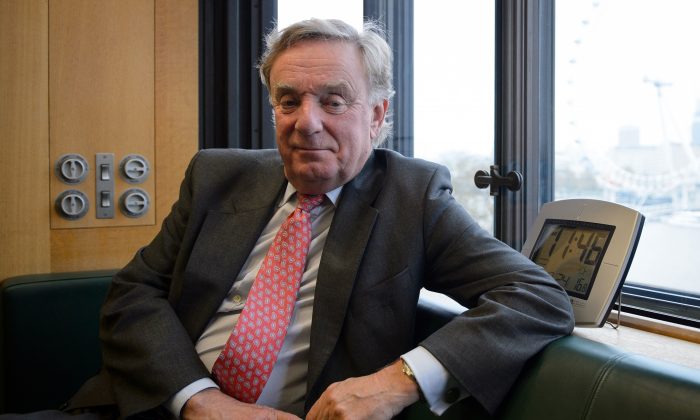 Richard Ottaway, chairman of the House of Commons Foreign Affairs Committee, poses for a picture during an interview at his office in Portcullis House, central London, on December 1, 2014. (Leon Neal/AFP/Getty Images)
China

During a rare emergency debate in the House of Commons, British parliamentarians asked the United Kingdom government to condemn China for denying them entry into Hong Kong.

British MPs from the Foreign Affairs Committee were planning a trip to Hong Kong in the third week of December as part of an inquiry to examine, in part, whether the Chinese Communist Party had kept its end of the bargain in maintaining Hong Kong’s autonomy under the One Country, Two Systems model.

As per the Sino-British Joint Declaration of 1984, Hong Kong was made a special administrative region of the People’s Republic of China, is supposed to enjoy a “high degree of autonomy,” and retains an independent legal system and other freedoms.

On Sunday, Nov. 30, Chinese embassy officials informed the Foreign Affairs Committee that they would be barred from Hong Kong because the Chinese regime does not want “any foreign government, organization or individual interfering in Hong Kong’s affairs.”

British Prime Minister David Cameron’s spokesman Jean-Christophe Gray responded by calling the ban “a mistaken one,” and added that it is “counterproductive because it only serves to amplify concerns about the situation in Hong Kong, rather than diminishing concerns.”

But the Chinese regime refused to budge and insisted that Britain’s objections are “useless.”

Senior British MPs called an emergency debate in the House of Commons on Tuesday, and did not hold back in their criticism of the Chinese regime.

Opening the debate, Sir Richard Ottaway, chair of the Foreign Affairs Committee which is heading the Hong Kong inquiry, said that the Hong Kong ban is “wrong and will have a profound impact.”

“This is a manifestly irresponsible and incorrect position to take.”

Sir Richard also said that the Chinese regime’s move “would only harm China’s reputation and financial interest in an increasingly global world.”

Sir Malcolm felt that the Chinese regime should have used the planned visit as an “opportunity” to explain the advantages of its Hong Kong Chief Executive candidates selection policy, and added that the Hong Kong ban would hurt the regime plan to get Taiwan to rejoin China under the One Country, Two Systems model.

During the lengthy emergency debate, British Foreign Office minister Hugo Swire also stressed that the Foreign Affairs Committee is independent from the British government, and does not count as the UK government interfering in the China’s internal affairs.

The Chinese regime has constantly played the “foreign interference” card whenever it feels that outsiders are asking too many questions about the state of democracy in Hong Kong, which has been brought to the world’s attention by the on-going Umbrella Movement.

For more than two months since the end of September, tens of thousands of students and concerned Hong Kong citizens took to the streets to demand truly democratic elections as set out in the Basic Law, Hong Kong’s mini-constitution.

Because the Foreign Affairs Committee started its inquiry into Hong Kong in July, two months before the start of the Umbrella Movement, Sir Richard noted earlier that the Chinese regime cannot claim that Britain is supporting the protesters with its trip.

“They’ve been building up to it for some time, accusing us of intervening in the internal affairs of another country,” Sir Richard said.

Sir Richard added during the emergency debate that Ni Jian, the deputy Chinese ambassador to Britain, said last Friday that the Sino-British Joint Declaration is “now void and only covered the period from the signing in 1984 until the handover in 1997.”

“This is clearly wrong and quite remarkable that we are hearing this only for the first time now, seventeen and a half years after the handover,” Young told the South China Morning Post.

Young added that under the Vienna Convention of the Law of Treaties, pacts can only be invalidated for corruption, coercion, conflict, error, or fraud, acts that are currently not applicable to the Joint Declaration. Also, the 1984 document cannot be terminated, suspended, denunciated or withdrawn.

Hugo Swire, the Minister of State for the Foreign and Commonwealth Office, told MPs at the emergency debate that the UK has “a legal interest and a moral obligation for the monitoring and implementation” of the Joint Declaration.

“It is vital that it is fully upheld… [and Britain should] pursue dialogue on issues, even where we disagree.”