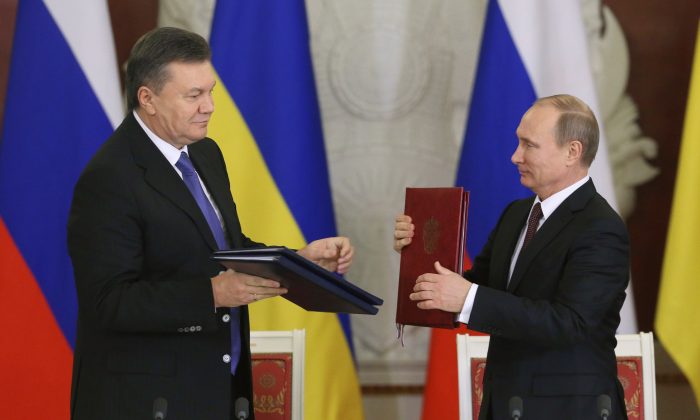 Russia's President Vladimir Putin (R) and his Ukrainian counterpart Viktor Yanukovych exchange documents at a signing ceremony after a meeting at the Kremlin in Moscow, Dec. 17, 2013. (Reuters/Sergei Karpukhin)
Europe

LONDON/KIEV—Britain’s court of appeal has ruled that Ukraine had a justiciable defense in a $3 billion Eurobond case that was originally brought by Russia and said the case should be allowed to go to full trial.

The decision in effect sets aside a lower court judgment that went in favor of Russia in March 2017, when a judge ruled the case, centered around money that Moscow lent to Kiev in 2013, shouldn’t proceed to trial because Ukraine hadn’t offered a defense that was justiciable—or capable of being settled in court.

The new ruling found that one of the four arguments presented by Ukraine met this test, and gives both sides the right to turn to the UK Supreme Court. Ukrainian Finance Minister Oksana Markarova said her country would take that step.

If the Supreme Court, which is likely to hold a hearing in the first half of 2019, also agrees that the case should go to full trial, the case will be heard at the UK’s High Court.

The debt is structured as a Eurobond governed by English law. Moscow wants the bond to be repaid in full but Kiev argues that Russia should have participated in a 2015 restructuring of other Ukrainian Eurobonds.

Ukraine disputed the validity of the loan on various grounds but the appeal court ruled that one of its arguments, related to duress arising from Russian aggression, particularly with regard to Crimea, was justiciable.

“It would be unjust to permit … Russia to proceed to seek to make good the contract claim without Ukraine being able to defend itself by raising its defense of duress at trial,” the court of appeal judges said in their judgment, given on Sept. 14.

They said it was desirable for the case to go to trial “to allow the whole pattern of alleged threatening behavior by Russia to be assessed in its full context.”

A statement from Ukraine’s legal counsel, Quinn Emanuel Urquhart & Sullivan UK LLP, said, “The Court of Appeal … has in allowing Ukraine’s appeal unanimously overturned the decision of Mr. Justice Blair, and found that Ukraine’s defense of duress is justiciable and should be the subject of a trial.”

Ukraine also won a stay on the debt repayment until the Supreme Court decision; the court ordered that interim costs paid to Russia following the earlier ruling should be repaid to Kiev.

Russia’s government, the sole holder of the notes, is represented by Cleary Gottlieb Steen & Hamilton LLP. It played down the significance of the ruling, with Finance Minister Anton Siluanov noting the court had backed only one of Ukraine’s four arguments.

Aside from arguing the debt was contracted under duress, Ukraine had based its defense on the argument that the borrowing, made by former president Viktor Yanukovych, hadn’t been properly authorized and had been subject to terms and conditions that weren’t spelled out in the contract.

It had also argued that non-payment was a countermeasure against interference in its economy and territory, following Moscow’s military 2014 intervention and annexation of Crimea.