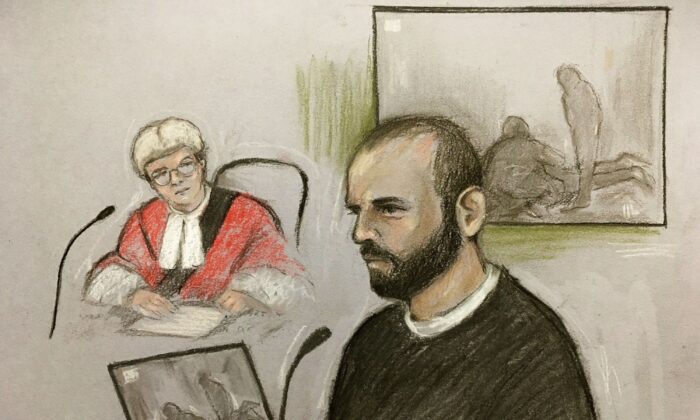 An artist's sketch of Nathan Smith during a manslaughter trial at Bristol Crown Court which found him not guilty on Jan. 26, 2022. (Elizabeth Cook/PA)
UK

A carer who suffocated a suspected burglar while performing a citizen’s arrest has been cleared of manslaughter.

Nathan Smith, 38, knelt on 43-year-old Craig Wiltshire’s back for nine minutes in the early hours of November 20 2019 after tackling him in the street.

He refused to ease off even when the victim twice told him he could not breathe, telling him “I don’t give a shit what you can and can’t do”.

Smith denied wrongdoing, claiming he believed Wiltshire was “pretending” to be in distress so he would release him and he could escape.

Wiltshire was believed to have been behind a string of thefts and break-ins in the Bristol suburb where Smith was employed as a live-in carer.

Despite repeated complaints to the police, the thief was never caught and there was no active police investigation into the break-ins.

A post-mortem found the victim had the sedative diazepam and the heroin-substitute methadone in his system and a pre-existing heart condition.

Smith said he did not know that Wiltshire was vulnerable to cardiorespiratory arrest, and that he did not know leaving someone in the prone position for a prolonged period of time was dangerous.

On Wednesday, a jury at Bristol Crown Court cleared Smith of manslaughter after four hours and seven minutes of deliberations.

The prosecution had claimed Smith was angry with Wiltshire, and that he took the opportunity to punish him for his alleged crimes.

Prosecutor James Ward cited insults hurled by Smith at the victim including swearing at him as proof he wanted to hurt him.

“I was being loud so other people would come, I didn’t want to shout ‘help’ so he knew I needed help, and I wanted to make him think I was more in control than I was,” Smith replied.

He insisted he wasn’t angry or trying to punish the victim, adding: “I just wanted the police to come and get him.”

Smith said Wiltshire had been reaching for his pockets, adding he feared he had a weapon on him.

Kimberly Lock, a neighbour, said the community had been “terrorised” by the break-ins, and had extra locks fitted to her house, including a sliding bolt to her bedroom.

An expert in forensic and legal medicine told the court he did not think that Smith’s method of restraint, as a member of the public with no training, was inappropriate.

Professor Jason Payne-James added: “In terms of the persistence of the prone restraint, I believe that would have been inappropriate if police personnel had continued that for that length of time without moving or monitoring (Wiltshire).”

But Prof Payne-James agreed it was likely the victim would have survived if he had been sat up or rolled on to his back at the point he told Smith he could not breathe.

Smith’s employer Michael Crooks is also seen in the CCTV footage adding his weight to Wiltshire for a few minutes, while his son Ben Crooks is seen kicking the prone man twice.

They have both admitted a charge of common assault and were not charged with manslaughter.

The jury was told to assume that Wiltshire was the man suspected of committing burglaries in the neighbourhood over the previous weeks, and that the arrest was not a case of mistaken identity.