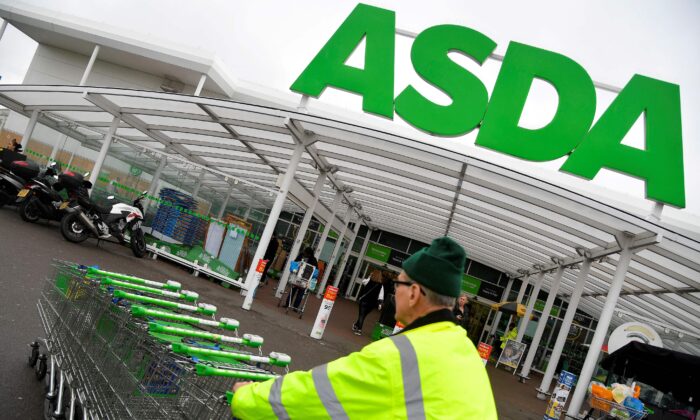 LONDON—Britain’s billionaire Issa brothers and private equity group TDR Capital have bought Asda from Walmart in a deal which gives the British supermarket chain an enterprise value of $8.8 billion and the buyers a platform to roll out smaller stores.

Mohsin and Zuber Issa, who founded petrol station operator EG Group nearly two decades ago, are taking Asda back under British ownership for the first time since 1999 when U.S. retail giant Walmart paid £6.7 billion for it.

“The Issa brothers have a reputation for good brand partnerships, for convenience and for growth and that’s really what we were interested in for Asda,” Judith McKenna, President, and CEO of Walmart International told Reuters on Friday.

McKenna said the deal was not about job cuts and the new owners said they are targeting growth by expanding into convenience shops from its large supermarket and online operations, bringing Asda more in line with market leader Tesco and No. 2 Sainsbury’s.

The Issas said they wanted to utilize their experience to help “build a differentiated business” at Britain’s third-biggest supermarket chain, in which Walmart will retain an unspecified minority stake, as well as a commercial relationship and a board seat.

British retail veteran Roger Burnley will remain as CEO of Asda in a deal which ratings agency Moody’s said allows Walmart to continue to refocus its international efforts on markets with more long-term upside, such as India and China.

McKenna would not say for how long Walmart has committed to remain an investor or comment on the possibility of an initial public offering (IPO).

“The brothers and TDR will help make decisions about what that future path looks like,” she said.

The new owners said they will invest more than £1 billion over three years to keep prices low, develop supply chains, and in e-commerce, in addition to convenience stores.

British finance minister Rishi Sunak welcomed the deal, which will see Asda retain its headquarters in the northern English city of Leeds.

Last year Walmart’s attempt to sell Asda to Sainsbury’s for £7.3 billion was thwarted by Britain’s Competition and Markets Authority and McKenna said she expected the regulator to also consider the new deal.

Britain’s highly competitive supermarket sector has been upended by the COVID-19 crisis, which sparked a jump in sales—and costs—as shoppers stocked up on goods during lockdowns.

While Asda’s sales rose, it still lagged the growth of its biggest rivals, partly due to a lack of convenience stores that have thrived as Britons shop closer to home.

All of the big four chains also face fierce competition from German discounters Aldi and Lidl and there are fears recession triggered by the crisis will spark a margin damaging price war.

By Kate Holton and James Davey