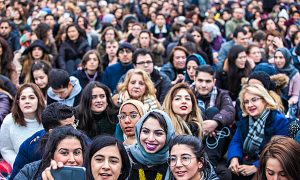 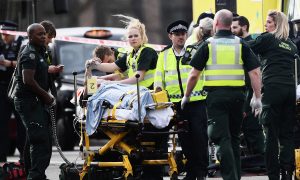 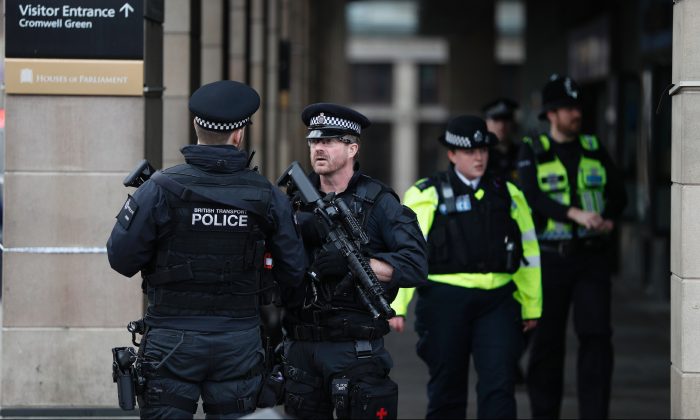 LONDON—The attacker who killed three people near the British parliament before being shot dead was British-born and was once investigated by MI5 intelligence agents over concerns about violent extremism, Prime Minister Theresa May said on Thursday.

The ISIS terrorist group claimed responsibility for the attack in a statement issued by its Amaq news agency. But it gave no name or other details and it was not clear whether the attacker was directly connected to the group.

Police arrested eight people at six locations in London and Birmingham in the investigation into Wednesday’s lone-wolf attack that May said was inspired by a radical Islamic ideology.

About 40 people were injured and 29 remain in hospital, seven in critical condition, after the incident which resembled ISIS-inspired attacks in France and Germany where vehicles were driven into crowds.

The terrorist sped across Westminster Bridge in a car, ploughing into pedestrians along the way, then ran through the gates of the nearby parliament building and fatally stabbed an unarmed policeman before being shot dead.

“What I can confirm is that the man was British-born and that some years ago he was once investigated by MI5 in relation to concerns about violent extremism,” May said in a statement to parliament.

“He was a peripheral figure…He was not part of the current intelligence picture. There was no prior intelligence of his intent or of the plot,” she said, adding that his identity would be revealed when the investigation allowed.

The mayhem in London took came on the first anniversary of attacks that killed 32 people in Brussels. Twelve people were killed in Berlin in December when a truck ploughed into a Christmas market and 84 died in July in a similar attack on Nice waterfront for which ISIS claimed responsibility.

ISIS, which is being driven from large areas of Iraq and Syria by local forces supported by a U.S.-led military coalition, said it was responsible for the London attack.

“The perpetrator of the attacks…is an ISIS soldier and he carried out the operation in response to calls to target citizens of the coalition,” a statement on its Amaq agency said.

Westminster Bridge and the area just around parliament were still cordoned off on Thursday morning and a line of forensic investigators in light blue overalls were on their hands and knees, examining the scene where the attacker was shot.

The dead were two members of the public, the stabbed policeman and the attacker.

“My thoughts, prayers, and deepest sympathy are with all those who have been affected by yesterday’s awful violence,” Queen Elizabeth said in a message.

Britain’s plan to trigger the formal process of exiting the EU on March 29 will not be delayed due to the attack, May’s spokesman said.

“Took out His Rage”

It was the worst such attack in Britain since 2005, when 52 people were killed by radical Islamic suicide bombers on London’s public transport system. Police had given the death toll as five but revised it down to four on Thursday.

“We meet here, in the oldest of all parliaments, because we know that democracy and the values it entails will always prevail,” she said.

“A terrorist came to the place where people of all nationalities and cultures gather what it means to be free and he took out his rage indiscriminately against innocent men, women and children,” said May.

A minute’s silence was held in parliament and in front of police headquarters at New Scotland Yard at 0933 GMT, in honor of the victims—933 was the shoulder number on the uniform of Keith Palmer, the policeman who was stabbed to death.

May was in parliament on Wednesday, a short distance away from the spot where the attacker was shot. She was swiftly whisked away as the chaos erupted, according to lawmaker Andrew Bridgen, who was nearby at the time.

A government minister was widely praised for trying to resuscitate Palmer, walking away from the scene with blood on his hands and face.

A crowdfunding page hastily set up to raise money for Palmer’s family attracted close to 20,000 pounds ($25,000)within three hours.

Some have been shocked that the attacker was able to cause such mayhem in the heart of the capital equipped with nothing more sophisticated than a hired car and a knife.

“The police and agencies that we rely on for our security have forestalled a large number of these attacks in recent years, over a dozen last year,” said defense minister Michael Fallon.

“This kind of attack, this lone-wolf attack, using things from daily life, a vehicle, a knife, are much more difficult to forestall,” he told the BBC.

Three French high-school students aged 15 or 16, who were on a school trip to London with fellow students from Brittany, were among the injured.

French Foreign Minister Jean-Marc Ayrault, who traveled to London to bring a message of solidarity, met some of the other students who were on the school trip and their families at a hotel near the hospital where the injured were being treated.

He told reporters the lives of the three youngsters were not in danger. Ayrault later attended the session in parliament where May spoke. France has been hit by repeated deadly radical Islamic attacks over the past two years.

A vigil was planned in London’s Trafalgar Square at 6 P.M.

Anti-immigration groups were quick to make links between immigration and the attack, though it was subsequently revealed the attacker was British-born.

Leave.EU, a group that has campaigned for immigration to be severely restrained as part of Britain’s exit from the European Union, accused mainstream politicians of facilitating acts of terror by failing to secure borders.