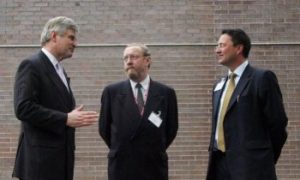 By Kristina Skorbach
Print
Britain's General Medical Council stripped Doctor Andrew Wakefield of his license to practice medicine for professional misconduct when doing research on the link between autism and vaccines for measles and other diseases.

Doctor Andrew Wakefield was born into a family of doctors, after receiving his doctoral licence in 1981 in Canada, he became a member of the Royal College of Surgeons in 1985. He published many research papers in his field and became interested in the possible link between autism and vaccines reported BBC.

The research piece that Wakefield published in 1998 in the Lancet, a medical journal, provided sufficient evidence that vaccines for measles, mumps and rubella could produce autistic symptoms in kids. According to AP, after the paper caused a stir, the number of kids that received vaccinations went from 95 percent in 1995 to 50 percent in 2000, in the UK.

Even though many pieces printed in medical journals say that vaccines for measles are safe and could have prevented the recent outbreaks, Wakefield stood by his research results and opened up an autism center in U.S. in 2004.

Earlier this February, the Lancet journal formally retracted the paper Wakefield printed on the basis that it was not properly approved by the local ethics committee.

In his interview with the Boston Globe, Wakefield said “I think there are certain vaccinations that are not justified,” and suggests that the overall number of vaccination decrease per child.

Even though the medical community has not reached an agreed conclusion on the link between autism and vaccines, there is evidence that vaccines can have negative effects on children who suffer specific medical conditions. Wakefield reportedly plans to appeal this Monday’s ruling.