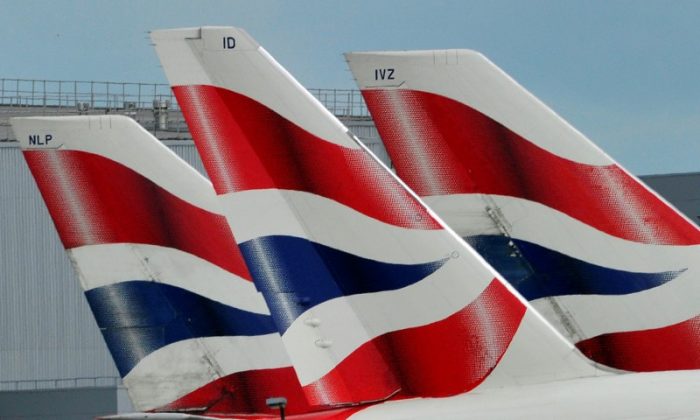 LONDON—British Airways has canceled all its flights from London’s two biggest airports until Saturday evening after a global computer system outage caused confusion and chaos, with thousands of passengers queuing for hours and planes left stuck on runways.

The airline, which said there was no evidence the problem had been caused by a cyber attack, said terminals at Heathrow and Gatwick had become extremely congested because of the IT failure and all BA flights scheduled before 1700 GMT had been canceled.

“Please do not come to the airports. We have experienced a major IT system failure that is causing very severe disruption to our flight operations worldwide,” said BA, part of Europe’s largest airline group IAG.

“We are extremely sorry for the inconvenience this is causing our customers and we are working to resolve the situation as quickly as possible.”

The problems, which passengers said had affected flights across Britain, came on a particularly busy weekend with a public holiday on Monday and many children starting their school half-term breaks.

“It’s a complete nightmare. There’s just hundreds and thousands of people accumulating in the departures bit,” Roshni Burt, who was flying from Heathrow to Bahrain with her young son, told Reuters.

She arrived at the airport at 0730 GMT, queued for hours at the check-in where the baggage drop-off system stopped working and then waited at the departure gate for two hours until passengers were told the flight was canceled.

All the affected passengers were corralled through a single gate so they could go back through border checks and then re-book flights.

BA is the latest airline to be hit by computer problems. Last month Germany’s Lufthansa <LHAG.DE> and Air France <AIRF.PA> suffered a global system outage which prevented them from boarding passengers.

In September last year BA apologized to passengers for check-in delays caused by operational glitches that delayed flights at Gatwick and Heathrow, in a repeat of a similar incident that affected London-area flights for the airline last July.

Passengers at British airports on Saturday said they had boarded flights but then were stuck on the runway.

“Still on the tarmac at Leeds. #britishairways reckon Heathrow is so backed up we can’t set off. No way we’ll make our Vegas flight,” one passenger David Raine wrote on Twitter.

Another, journalist Martyn Kent, wrote: “Sat on plane at Heathrow for hour and a half now. @British_Airways Captain describes IT problem as ‘catastrophic’.”

Heathrow Airport, one of the world’s busiest, said in a statement: “We are working closely with the airline to assist passengers who have been affected by the British Airways issue and have extra customer service colleagues in terminals to assist those passengers already at Heathrow,”