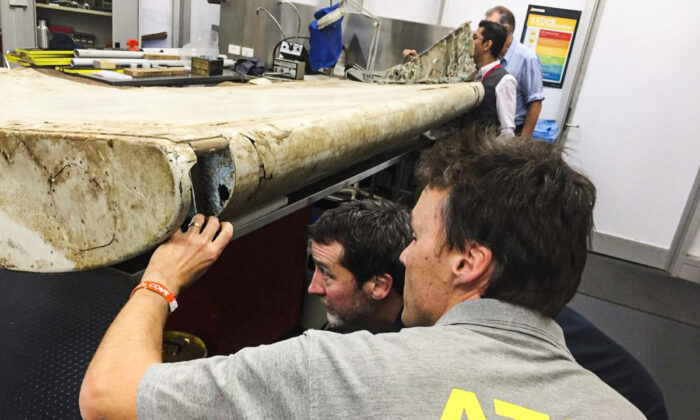 Staff from the Australian Transport Safety Bureau examine a piece of aircraft debris that is highly likely to have come from flight MH370 at their laboratory in Canberra, Australia, on July 20, 2016. (ATSB via AP, File)
International

Expert Richard Godfrey, a founding member of the nongovernmental MH370 Independent Group, says he’s confident that the plane crashed into the southern Indian Ocean 1,993 kilometers (1,238 miles) west of Perth and lies 4,000 meters (4,374 yards) below the surface, at the foot of an oceanic plateau called the Broken Ridge.

The plane is lying in a very mountainous area with difficult underwater terrain, cliffs, an underwater volcano, and a canyon, Godfrey says.

In a Nov. 30 report (pdf), the engineer said he had analyzed the plane’s flight path and final movements using Global Detection and Tracking of Any Aircraft Anywhere (GDTAAA) software based on the Weak Signal Propagation Reporter (WSPR) data publicly available on WSPRnet.

“The WSPRnet data provides hundreds of radio signals every two minutes during the flight of MH370,” Godfrey wrote in the report. “These radio signals propagate around the globe between transmitters and receivers with help of refraction in the ionosphere. The path of an aircraft can disturb the propagation path of the radio waves.

Meanwhile, GDTAAA software is used to predict the aircraft’s position every two minutes using the actual ground speed and track of the aircraft.

“When the predicted position of the aircraft aligns with a WSPRnet progress or position indicator, then the radio signal characteristics are analyzed to see if an aircraft has been detected,” Godfrey wrote. “When there are several aircraft in the vicinity of the target aircraft, then a process of elimination is required. In the relatively empty air space of the southern Indian Ocean, this process of elimination is not required.”

Flight 370 was headed from Kuala Lumpur, Malaysia, to Beijing on March 8, 2014, with 239 people on board when it abruptly disappeared from radar. All passengers and crew are presumed dead, but there’s been no resolution to the mystery of the flight’s disappearance, and search efforts are still ongoing.

“Taken together this data supports an overwhelming case for a renewed search in the prime crash location of 33.177°S 95.300°E,” Godfrey wrote of his findings on Nov. 30.

“The proposed search area is defined by a circle with a radius of 40 nautical miles centred on the prime crash location.”

Godfrey told Sunrise Australia on Dec. 1 that he was “very confident” he had identified where MH370 is located.

“We have quite a lot of data from the satellite, we have oceanography, drift analysis, we have the performance data from Boeing, and now this new technology,” he said. “All four align with one particular point in the Indian Ocean.”

The expert said he also believes the plane was hijacked and that the crash was “an act of terrorism” by pilot Captain Zaharie Ahmad Shah, who he believes “decided to divert his aircraft and make it disappear in one of the remotest places in the world.”

The location in which Godfrey believes MH370 crashed is also in the same zone where the University of Western Australia (UWA) Head of Oceanography professor Charitha Pattiaratchi had earlier claimed the plane was located.

Speaking to Sunrise, The West Australian aviation editor Geoffrey Thomas described Godfrey’s report as a “huge breakthrough,” noting that his findings also resemble those of Pattiaratchi.

“It really is more evidence that where UWA said this airplane is, that’s where we have to have another good, hard look.”