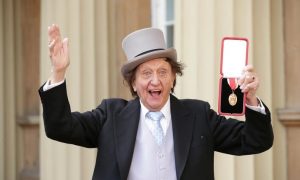 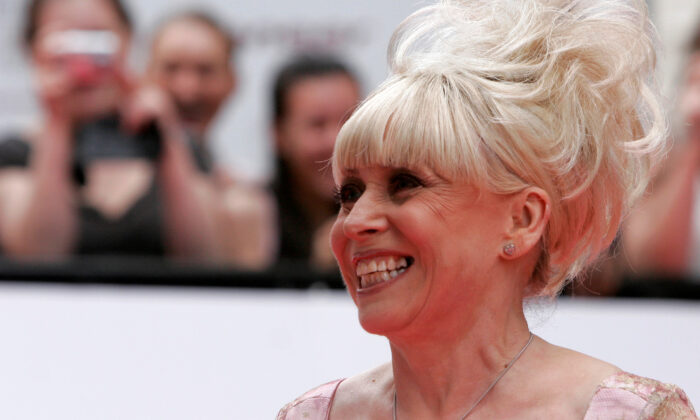 Fans photograph actress Barbara Windsor as she arrives for the British Academy Television Awards at the Palladium theatre in London, on May 20, 2007. (Luke MacGregor/Reuters)
UK

LONDON—Barbara Windsor, one of Britain’s most popular actresses best known for her roles as pub landlady Peggy Mitchell in the BBC TV soap “EastEnders” and in the bawdy “Carry On” films, has died aged 83.

Windsor, a household name in Britain known simply as “Babs”, died at a care home in London on Thursday night, her husband Scott Mitchell said.

“Her passing was from Alzheimer’s/Dementia and Barbara eventually died peacefully and I spent the last seven days by her side,” he said in a statement. “It was not the ending that Barbara or anyone else living with this very cruel disease deserve.”

Windsor had been diagnosed with the disease in 2014 and last year presented Prime Minister Boris Johnson with a petition calling for more investment in dementia treatment.

“So sad about Barbara Windsor, so much more than a great pub landlady & Carry On star,” Johnson said on Twitter.

So sad about Barbara Windsor, so much more than a great pub landlady & Carry On star. She campaigned for the lonely and the vulnerable – and cheered the world up with her own British brand of harmless sauciness & innocent scandal. Thoughts with Scott and all her family & friends.

“She campaigned for the lonely and the vulnerable—and cheered the world up with her own British brand of harmless sauciness & innocent scandal. Thoughts with Scott and all her family & friends.”

The actress was born Barbara Deeks but changed her name to Windsor shortly after making her West End debut in 1952.

She joined “EastEnders” in 1994, taking a sabbatical from the show for medical reasons in 2003, before returning as a series regular in 2005.

Windsor quit the long-running soap in 2009, saying she wanted to spend more time with her husband whom she had married in 2000.

The actress said at the time that the role as Peggy Mitchell, which saw her famously shouting “Get outta my pub” at startled locals, had changed her life.

Before EastEnders, Windsor had been mostly known as a comedy actress. She made her film acting debut in “The Belles of St Trinian’s” in 1954 and shot to prominence appearing in many of the innuendo-laden “Carry On” movies of the 1960s and 70s.

“She was a remarkable woman and it’s not an overstatement to say I think the whole country is in mourning today,” comedian Matt Lucas wrote on Twitter.