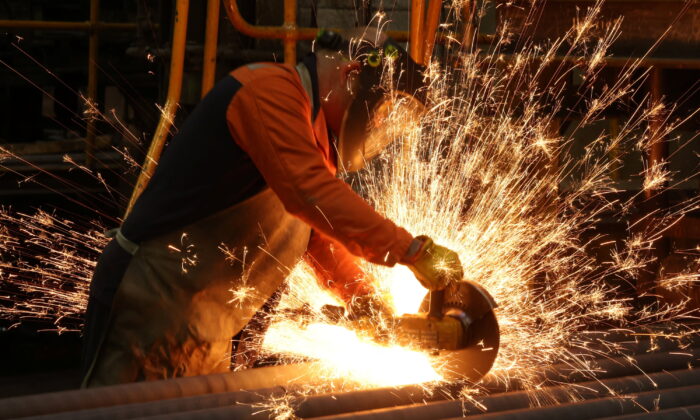 CHESTERFIELD, England—Steel boss James Brand raises his voice above the roar of metal being funnelled into a foundry furnace as he details how rampant costs have pushed him to raise his prices by 70 percent.

Yet he says that, despite this hefty hike, his customers in sectors including oil and gas, autos, and construction are placing new orders at a record-breaking gallop. His order book has ballooned from the usual 4–6 weeks to 6 months.

Those clients anticipate further price rises at a time when the cost of pig iron and scrap metal is going through the roof, fueled by the Ukraine war, and the vast amount of energy needed to melt the two inputs into cast iron has never been more expensive.

“With raw materials and costs escalating, customers are thinking, ‘If I don’t buy now, in two months it will be even more expensive,'” Brand said amid the heat, dust and hubbub of United Cast Bar’s (UCB) factory in a part of northern England that once powered the Industrial Revolution.

“People are placing orders ahead, to try and fix as many costs as they can.”

Having once struggled to increase prices at all, UCB is now reviewing them every month and gradually marking them up, extra costs that will seep into global production lines, further stoking inflation and a consumer cost-of-living crisis.

Yet Brand said despite the price rises, the pressures were still building on the business. Without giving full financial details, he said UCB’s gross margin had dropped by about 6 percent.

Similar problems are being felt by steelmakers and other industrial companies across Europe. They’re caused by rocketing power prices, driven by a supply squeeze, as well as ongoing COVID disruption and Russia’s invasion of Ukraine—two countries that are both major producers of pig iron.

The situation is particularly acute in Britain, though. The steel industry there faces electricity prices that are 50-60 percent above those faced by peers in Germany and France due to environmental policies, a reliance on gas, as well as power transmission and carbon permit costs above those in Europe.

This spells trouble for companies like UCB, which devours power for its two 8-tonne electric-induction furnaces, which reach over 1,400 degrees Celsius to melt the scrap and pig iron, before the molten metal is poured into a receiver to cast into the desired shape and cool, ready to go to Europe, the Americas, Australia, New Zealand, or within Britain.

“It’s a hefty bill,” added Brand, the fourth generation of his family to work in the metals and steel industry, from the site in Chesterfield, a town in the orbit of the northern English city of Sheffield, historically famed for its steel.

“It’s even worse at the moment.”

How Long Will Customers Pay?

The scale of the power price jumps facing Britain’s manufacturers, which generate about a tenth of economic output, is being compounded by the rise in raw material costs.

Such costs leapt by more than 19 percent in the 12 months to March, the biggest annual rise since records began in 1997 and far above the long-term average of about 2 percent.

Steve Elliott, head of Britain’s Chemical Industries Association, a trade group for another energy intensive sector, said their companies were having to manage electricity and gas demand closely.

As a foundational sector that produces goods needed by so many other sectors, the likes of chemical, glass and steel producers have been able to cope, as long as they can pass price rises on to customers, he said.

“It’s just that businesses are becoming less able to do that. As each month passes, demand softens as the cost of living increasingly bites.”

He worries that eventually his prices will hit a point where customers can no longer afford them, triggering a collapse in demand and—in the rollercoaster ride for businesses that a pandemic and war has created—a new downward spiral.

Asked if he could continue to operate in the current environment, Brand says he can, just, as long as customers keep accepting the increases. “It gets tight and margins get slimmed out (but) we’re still surviving,” he said.

Indeed the ability of UK companies to keep on passing their soaring costs on to customers is something policymakers are watching closely as they try to gauge how persistent the recent leap in consumer price inflation is likely to be.

A shortage of workers, cargo ships and resources has choked the global economy, forcing price rises in everything from food and furniture to fuel and flights.

“It will be really, really crucial to see if demand slows. The Bank of England is very focused on that,” Morgan Stanley economist Bruna Skarica said.

“For the BoE to feel comfortable that inflation will fall back to 2 percent, they do need to see pricing power come off and that will happen when demand slows.”

Across Europe, surging costs have forced energy-intensive businesses to either cut or halt production, sometimes from hour to hour depending on the cost of electricity at the time.

Even ArcelorMittal,, the world’s largest steelmaker, has been operating its electric arc furnaces in various European sites in a stop-start mode for months to avoid peak electricity prices that would deal a major financial blow to its business.

Germany’s Thyssenkrupp has cut working hours for 1,300 of its steel workers due to flagging demand from the autos sector, its biggest market, which has struggled with supply-chain disruptions and chip shortages.

And small German steelmaker Lech-Stahlwerke has also halted production at a plant in Bavaria. “In some cases, energy prices are 10 times higher than last year,” Thomas Friedrich, a member of Lech-Stahlwerke’s management, told Reuters TV.

Frank Aaskov, policy director on energy at trade body UK Steel, said some British steelmakers had halted production temporarily in response to surging prices, but declined to give details.

Brand said UCB had hedged 75 percent of its energy costs until September, reducing its exposure to future price swings, and had other hedges for the next two years.

But the increases and the volatility hurt.

The British government has acknowledged that industrial firms in the country face higher energy costs than some peers on the continent. It said in a new energy strategy this month that it would extend a compensation scheme for intensive users for another three years, a move welcomed by industry as a step that would help bridge the disparity in power prices.

Analysts, industry sources and politicians said today’s British manufacturers had carved out a key niche on global supply chains by providing high-value products, and that they should survive the short-term turmoil.

Darren Jones, the head of Britain’s parliamentary select committee on business and energy, welcomed the latest government intervention but told Reuters he remained worried about the long-term impact of such a harsh environment.

“The scale of the energy crisis we’re facing over the next year means that businesses will fail and jobs will be lost, as well as production hit, if we do not see more support,” he said.