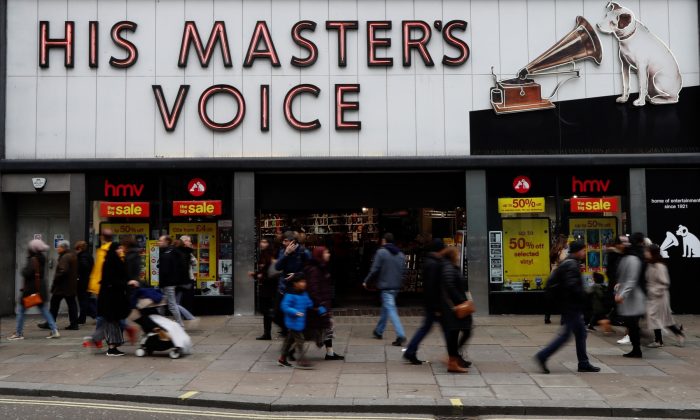 Britain’s HMV Faces the Music as Retailer Calls in Administrators

Music retailer HMV said on Dec. 28, it was calling in the administrators, blaming a worsening market for entertainment CDs and DVDs, to become the latest victim of brutal trading conditions in Britain’s retail sector.

The accounting firm KPMG has been named as the administrator and intends to keep the business running while it seeks a potential buyer, HMV said in a statement.

Will Wright, Neil Gostelow and David Pike from KPMG’s Restructuring practice have been confirmed as joint administrators to HMV Retail Limited and HMV Ecommerce Limited, KPMG said in a statement late Friday.

The retailer, one of Britain’s best-known high street stores, went into administration in 2013 before its rescue by restructuring specialist Hilco, but it has since been hit by competition from online rivals and music streaming services.

Sky News earlier reported that about 2,200 jobs were at risk if HMV went into administration, adding that the company had been in talks with leading names in the recorded music industry for funding, but that those discussions came to nothing.

HMV was opened on London’s Oxford Street by English composer Edward Elgar in 1921 and made famous by the image of the “dog and trumpet”.

“During the key Christmas trading period, the market for DVDs fell by over 30 percent compared to the previous year, and whilst HMV performed considerably better than that, such a deterioration in a key sector of the market is unsustainable,” said Paul McGowan, Executive Chairman of HMV and its owner Hilco Capital, which paid around 50 million pounds ($63.47 million) for the group in 2013.

“The company has suffered from the ongoing wave of digital disruption sweeping across the entertainment industry”, said Wright, a joint administrator and partner at KPMG.

“Over the coming weeks, we will endeavour to continue to operate all stores as a going concern while we assess options for the business, including a possible sale”, he added.

Britain’s retailers had been hoping Christmas would revive spending after a year for much of the sector that has seen a string of store groups go out of business or close shops.

In the years running up to its first rescue in 2013, HMV struggled to hold its own against supermarkets and online services in sales of CDs, DVDs and video games.

More recently, traditional players in the music industry have been hit by the growing popularity of online streaming services such as Spotify and Apple Inc’s Apple Music, which this year became the recording industry’s single biggest revenue source.

HMV—which had a hand in The Beatles’ big break in the 1960s, recommending the group’s demo record to publishers—had around 230 stores and over 4,000 staff before it went into administration in 2013. It currently has 125 stores around Britain and employs 2,025 people.